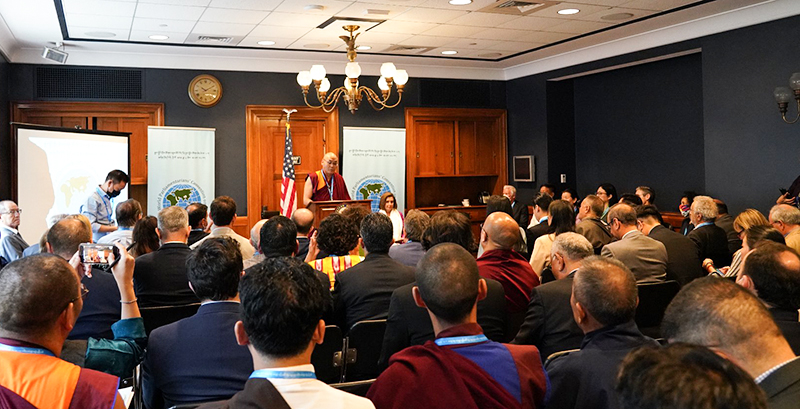 The eighth World Parliamentarians’ Convention on Tibet organised by the Tibetan Parliament-in-Exile (TPiE) commenced in Washington DC, US, with more than 100 participants representing 28 nations. The Speaker and the Deputy Speaker of the TPiE, Sikyong of the Central Tibetan Administration, Kalon (Minister) of the Department of Information and International Relations (DIIR), Tibetan Parliamentarians, DIIR Secretary, Representatives from the Offices of Tibet, Scholars and were among the attendees and also involved tremendous support from the members of the US Congress, especially from Hon Nancy Pelosi, the Speaker of the US House of Representatives.

The inaugural ceremony, held in the US Senate Dirksen Building, Capitol Hill, commenced with a welcome speech by the Speaker of TPiE, who said, “It gives me immense pleasure to welcome all the distinguished parliamentarians from across the world to this convention. It is certainly an honour for me to address this esteemed gathering on behalf of the Tibetan Parliament-in-Exile. I would like to thank all of you for taking out time from your busy schedule to show your solidarity for the just cause of Tibet.”

“With the growing unethical and inhuman atrocities around the world in general and in Tibet by the leadership of the People’s Republic of China in particular, to have such a convention and bring all the like-minded decision-makers on one platform becomes pivotal. Till date, we have had seven World Parliamentarians’ Conventions on Tibet (WPCT) in various countries,” the Speaker said.

The speaker spoke of the increasingly unethical and inhumane atrocities committed in the world and in Tibet by the leadership of the People's Republic of China. He said that despite grandiose declarations of "liberation and development", the situation in Tibet remains dark and terrible and that Tibetans are deprived of the most basic human rights, which are also recognised in the UN Universal Declaration of Human Rights.

“The space for the Tibetans to protect, preserve and practice Tibetan Buddhist culture and identity is shrinking severely. Since 2009, 157 known cases of Tibetans from every sector of life have set themselves on fire in one of the biggest political protests in human history, yet instead of addressing the causes of this desperation, PRC has strengthened the very wrong policies that caused it. In a nutshell, Tibetans in Tibet continue to face political repression, cultural and social exclusion, economic and educational marginalization, and massive environmental destruction,” said the Speaker.

He concluded by expressing solidarity with the people of Ukraine, who are suffering under the invasion and hoped that this convention would pave the path for increased passion and promises to support Tibet cause among the decision-makers.

The inauguration continued with a keynote address by Speaker of the House of Representatives Nancy Pelosi, as well as Richard Gere, President of the International Campaign for Tibet (ICT), and Damon Wilson, President and CEO of the National Endowment for Democracy (NED).

“For decades, the Chinese government has waged a dangerous assault on human rights in Tibet, clearly showing that it has no regard for Tibetan autonomy or identity or faith. This forum is crucial, bringing together leaders of parliaments from all over the world to advance real autonomy for Tibet,” said Speaker Nancy Pelosi.

Since the Chinese government invaded Tibet in 1959, the Tibetan people have suffered severe and continuous persecution by the Chinese government. However, they have continued to defend human rights and freedom in Tibet through non-violent means. Tibetans work hard to protect their religion, environment, culture and identity in Tibet and around the world. One of the main objectives of the Eighth World Parliamentarians' Convention on Tibet was for parliamentarians to join international leaders in expressing their concern about human rights violations and religious persecution in Tibet.

“The Tibetan cause has increased over the years even when the focus point has been on other issues and other cultures. One wonders how can they get their history known? Their pain known, their present known, their suffering known. And we look to the Tibetan world and wonder how did they make their cause known. And especially with nonviolence, primarily with nonviolence - are the extraordinary things about the Tibetan Cause, nonviolence works, but it takes a long time, but once it works, it’s finished, It’s complete,” said Richard Gere, Chairman of the International Campaign for Tibet (ICT).

The Convention constituted of several powerful thoughts being showcased by mindful speakers. “In this period of democratic recession and rising authoritarianism the world needs sources of inspiration and models of thriving democracies more than ever. The Tibetan cause is that model. Democratic renewal begins with Democratic solidarity,” said Damon Wilson, President, and CEO of the National Endowment for Democracy (NED).