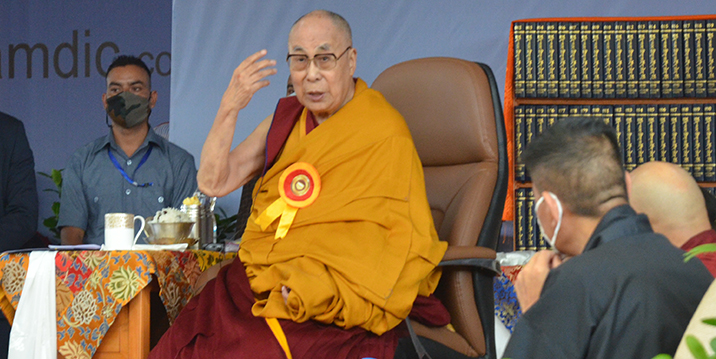 Leh, Ladakh, India — His Holiness the Dalai Lama, the spiritual leader of Tibet, congratulated Shrimati Drupadi Murmu on her election as President of India and expressed his confidence that the new President will do her utmost to build on the strengths of India and set an example by working towards a more peaceful world, inspired by the treasures of the ancient wisdom of India. He concluded by offering his prayers and best wishes.

After the announcement of the results of the recent election of the new Indian President, His Holiness the Dalai Lama wrote to Smt Drupadi Murmu to congratulate her on being elected President of India, on July 21, 2022.

“You are assuming this august position at a time when the international community is becoming ever more aware of the importance of India, which has much to contribute to the peace and development of the world,” His Holiness wrote in his congratulatory letter.

“I have a deep respect for India and, as the longest staying guest of the Government of India, I have had the opportunity to travel the length and breadth of the country. For thousands of years, India has upheld the principles of ‘Karuna’ and ‘Ahimsa’ and Mahatma Gandhi made the principle of non-violence spread far and wide. It has the potential to engender peace within individuals and the world at large. As it is, India is the land of religious harmony, with so many different communities living together here,” the spiritual leader of Tibet said.

“I often describe myself as a son of India because my entire way of thinking has been shaped by the Buddhist training I have received. As you may know, Tibetan Buddhist culture is firmly rooted in the traditions of reasoning and analysis developed by the scholar-adepts of Nalanda University,” His Holiness said.

“Today, although modern education has significant value, its focus is materialistic. It needs to be balanced by creating greater awareness and interest in ancient Indian knowledge of the workings of the mind and emotions. People could learn to develop emotional hygiene, which entails tackling their destructive emotions and finding peace of mind. In this respect, India is best placed to combine the two. I am committed to continuing this effort to create greater awareness and interest of this treasure, particularly the power of compassion, among Indian brothers and sisters, and also to share it with the world,” he added.

“As you may be aware, the Tibetan people and I have been honoured to receive the unparalleled support of the Government and people of India in our endeavour to protect and preserve our identity, including our ancient Buddhist culture. I would like to take this opportunity once again to express our deep gratitude through you, to the Government and the people of India, for the warm hospitality we have been granted for more than six decades,” the spiritual leader of Tibet said.

His Holiness expressed confidence that the new President will do whatever she can to consolidate India’s strengths and provide a lead in working to develop a more peaceful world, inspired by the treasures of India’s ancient wisdom. He concluded by offering his prayers and good wishes.

Draupadi Murmu was born on 20 June 1958 in Uparbeda village in Mayurbhanj district of Odisha. She was a teacher before joining the Bharatiya Janata Party (BJP) in 1997 and was elected as a Councillor of the Rairangpur Nagar Panchayat. In 2000, she became the Chairperson of the Rairangpur Nagar Panchayat and was also National Vice-President of the BJP Scheduled Tribes Morcha.