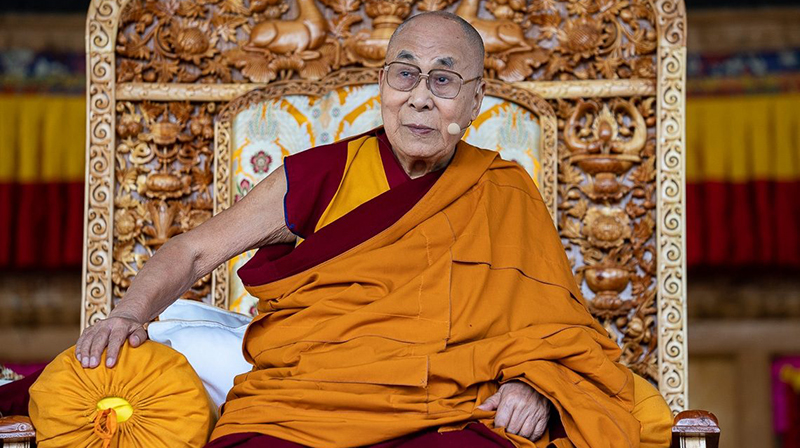 His Holiness the Dalai Lama speaking to the gathering at Thiksey Monastery in Leh, Ladakh, UT, India on July 25, 2022. Photo by Tenzin Choejor

His Holiness the Dalai Lama met hundreds of people and 3000 students from 15 schools and colleges around Leh, Ladakh, and gave talks on the importance of religious harmony among different religions, the importance of compassion, non-violence, and warm-heartedness, as well as on global warming on July 25, 2022.

“I very much appreciate the harmony that pervades the Ladakhi community,” His Holiness declared. “Whether we belong to one ethnic group or another, and whether we practise this religion or that, we are all essentially the same as human beings. From the moment of birth, when our mothers take care of us, until we breathe our last, we are all the same. Therefore, it’s in the interest of us all to live in peace and harmony,” said His Holiness the Dalai Lama.

“Whether we have faith in religion or not, the benefits of warm-heartedness can be taught as part of training in secular ethics. Wherever I go I adopt a friendly attitude—I smile and other people smile in return,” the spiritual leader of Tibet added.

“For thousands of years India has maintained the traditions of doing no harm— ‘ahimsa’ and compassion—‘karuna’, which are a source of happiness engendering peace within individuals and contributing to the creation of a happier world. Warm-heartedness is a key factor to living a happy life because we all have to live together,” said His Holiness.

“Another point I want to share with you, is that global warming is becoming a really serious problem. One of the positive steps we can take to counter it is to plant and care for trees. In this context, it’s wonderful to see so much greenery here at Thiksey. The Indian environmental activist Sunderlal Bahuguna gave me the task of reminding people in the Himalayan region how important this is. I promised I would, so please plant and take care of trees wherever and whenever you can,” His Holiness said.

His Holiness the Dalai Lama will give three days of teaching on the mornings of July 28, 29, and 30, 2022, at Shewatsel Teaching Ground near Choglamsar at the request of the Ladakh Buddhist Association and the Ladakh Gonpa Association.