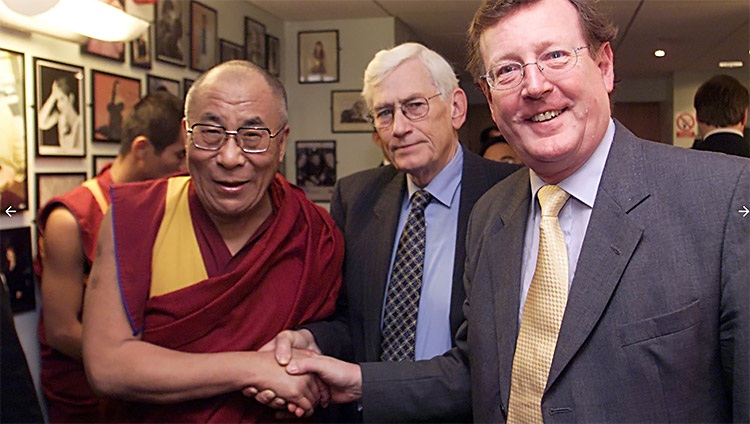 Leh, Ladakh, India — His Holiness the Dalai Lama, the spiritual leader of Tibet, expressed his condolences on the demise of Nobel laureate Lord David Trimble and wrote: "I am praying for him and extend my sincere condolences to you and your family members at this sad time."

His Holiness the Dalai Lama wrote to Lady Trimble, wife of Lord David Trimble, to express his sadness on July 26, 2022. After his demise on 25 July 2022.

“I pray for him, and offer my heartfelt condolences to you and members of your family at this sad time," His Holiness the Dalai Lama wrote.

“Your husband displayed vision, courage and a realistic approach in his efforts to find a mutually beneficial agreement that would bring peace to Northern Ireland. As someone who firmly believes in pursuing dialogue and diplomacy to resolve differences among opposing parties, I consider the role he played in bringing about the Good Friday Agreement to have been an example of peace-making for our times," the Nobel laureate said.

“I had the good fortune to meet your husband several times in Northern Ireland and elsewhere and was able to tell him myself of my admiration for the contribution he had made to bringing peace to Northern Ireland,” the spiritual leader of Tibet mentioned.

“It will be a fitting tribute to Lord Trimble if we can continue to work to resolve differences in a spirit of understanding, accommodation and respect, keeping in mind that we are all part of the oneness of humanity,” His Holiness concluded.

David Trimble was awarded the Nobel Peace Prize in 1998, "for his efforts to find a peaceful solution to the conflict in Northern Ireland".