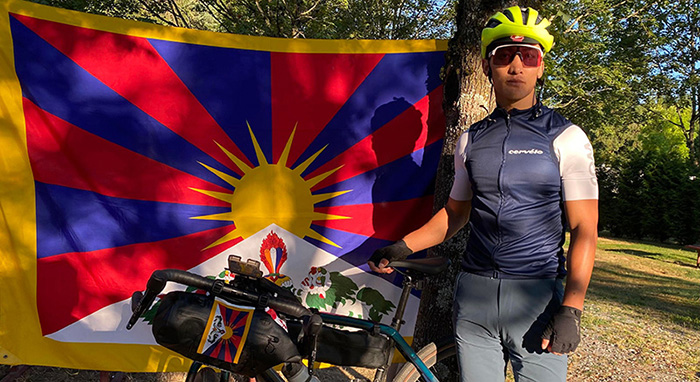 Tibetan activist Sangyal Kyab began his across Canada bicycle rally for a free Tibet on August 16, 2022.

Vancouver — A Tibetan activist in Canada has launched a Free Tibet bicycle rally across Canada with five demands to the international community and the Canadian government, including support for the release of the 11th Panchen Lama and other political prisoners in Tibet and an end to reckless development policies that are devastating the Tibetan environment and putting the entire planet at risk.

Tibetan activist Sangyal Kyab began his across Canada bicycle rally for a free Tibet on August 16, 2022, starting in Vancouver, Canada. He will attempt to cycle through all 10 provinces of Canada to raise awareness of the plight of Tibet, including human rights violations in Tibet, and the lack of freedom of religion, speech, and expression.

“I am a Tibetan and I have the responsibility to let people around the world know that Tibet is suffering, Tibetans do not enjoy basic human rights, the Chinese government carrying out harsh policies toward Tibetans, and difficult for them to live under Chinese rule, but that they have no other choice,” the Tibetan activist said.

“I urge the international community and world leaders to support Tibet, to support the return of His Holiness the Dalai Lama to Tibet and the resumption of the Sino-Tibetan dialogue in good faith, to allow His Holiness the Dalai Lama to return to his palace, the Potala, in Lhasa, Tibet, and to allow the reunion of Tibetans in Tibet and Tibetans in exile around the world,” he added.

"I will be handing out the placards to people on the way and I plan to distribute about a thousand in one province. The placards contain information about the self-immolations in Tibet and the plight of Tibet, as well as five demands to the international community and the Canadian government," Sangyal explained.

"The Free Tibet Bike Rally is a long way, I may encounter dangers, but I have no regrets. I am a Tibetan and I have the responsibility to tell the world that Tibet is suffering and to keep in my heart the testament of Tibetan heroes and heroines who sacrificed their precious lives for the Tibetan cause, and to continue to work for Tibet and to raise awareness of the Tibetan issue," the Tibetan activist concluded.

1) To support the return of His Holiness the Dalai Lama to Tibet.
2) To renew the Sino-Tibet dialogue in good faith.
3) To release Panchen Lama and other political prisoners in Tibet.
4) To support human rights in Tibet because living under immense repression, more than 170 Tibetans have self-immolated since 2009.
5) China stops reckless development policies are devastating Tibet's environment, putting the whole planet at risk.