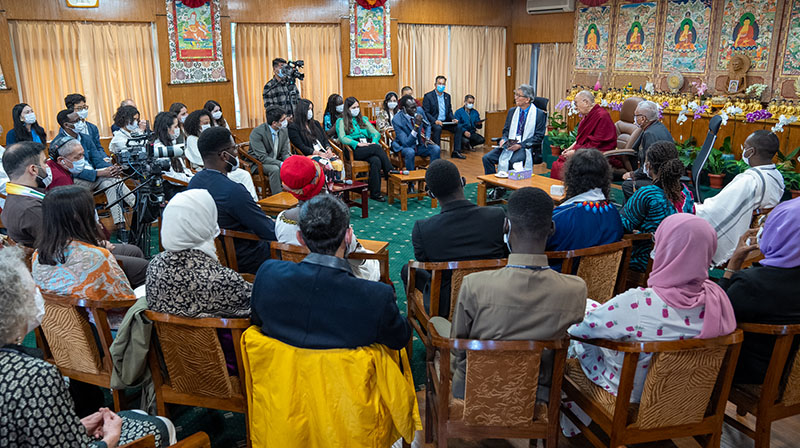 His Holiness the Dalai Lama in a dialogue with 26 young leaders from USIP in Dharamshala, HP, India, on September 22, 2022. Photo: OHHDL

Dharamshala, India — His Holiness the Dalai Lama met with the young leader and peace-builders from the United States Institute of Peace (USIP) on September 22, and said, “We have to make an effort to create a more peaceful world and a happier humanity. We can identify differences between us in terms of race, nationality, and religion, but we would be better instead to think of humanity as a whole.”

Two-day dialogue of His Holiness the Dalai Lama with 26 young leaders at his residence in Dharamshala, HP, India, on September 22, 2022, hosted by the United States Institute of Peace (USIP). The young leaders participating in this program, ages 20-30, are peacemakers in their communities in the Middle East, Africa, Southeast Asia, and South America.

David Yang, Vice President for Applied Conflict Transformation at USIP, as the moderator, announced that this is the seventh interaction between His Holiness and USIP delegates. He explained that today and tomorrow His Holiness the Dalai Lama would engage with 26 young leaders from 12 conflict-affected regions. He said that for the past two years, the meeting has been conducted as a virtual online dialogue, but now they were happy to meet in person.

As part of the youth leadership training, they recounted the bitter experiences and hardships they have faced since childhood, and how they have become leaders, change-makers and peace-builders in the regions.

Then His Holiness the Dalai Lama told them, “We have to make an effort to create a more peaceful world and a happier humanity. We can identify differences between us in terms of race, nationality, and religion, but we would be better instead to think of humanity as a whole. We all have equal rights. We are all born from a mother and most of us drink her milk. We depend on her kindness from the start of our lives. Warm-heartedness is an appropriate response.”

“Modern education tends to focus on material goals rather than inner values. It seems to encourage a sense of ‘us’ and ‘them’, instead of emphasising that we are essentially the same and we have to live together,” His Holiness the Dalai Lama said.

“Each of us has two eyes, one nose, one mouth. If one of us were to have three eyes, that would be a surprise. If we examine our brains, they are equally complex. Therefore, we have to encourage a strong sense of brotherhood and sisterhood,” His Holiness told the youths.

“As I said we are all born the same way, and in the end, we all die the same way. When that happens, it is not the ceremony that is important, but whether we have the warm affection of relatives and friends around us. As I told former Prime Minister Manmohan Singh, I expect to live another 15 or 20 years, but when I die, I would prefer to be free and surrounded by friends in India not hard-hearted Chinese Communist officials,” the Spiritual leader of Tibet said.

“Freedom is important in our lives. We need to be free to be able to exercise our brains, to be able always to ask, “Why?” From this point of view, totalitarian systems are wholly unfavourable. It is the freedom that fosters warm-heartedness and compassion, which in turn lead to inner peace. When you are warm-hearted there is no basis to be afraid. Fear is bad for the mind and too easily leads to anger. And anger is the real foe of peace of mind,” His Holiness mentioned.

“I practise compassion, so wherever I go, I smile and feel happy. As human beings we have to find how to live together in peace,” His Holiness the Dalai Lama told them.

“We need to aim for a completely demilitarized world, I am from Tibet where Chinese Communists have everything under tight control. But the Tibetan spirit is strong and we have preserved the Nalanda Tradition. Instead of relying on guns, we cultivate compassion. Six million Tibetans put their faith in what the Buddha taught about forgiveness and compassion,” the Tibetan spiritual leader told them.

“I believe that as human beings we are all fundamentally compassionate. We have to build a world founded on human values—a demilitarized world, a world no longer dependent on the use of weapons. When people fight and die, their minds are not at peace, but we can imagine building a world based on compassion,” His Holiness said.

Asked what qualities are required to bring about peace, His Holiness remarked: “I am a Buddhist and as soon as I wake every morning, I remind myself that all human beings are the same as me—we all want to be happy. I resolve to use my life to ensure that other beings are happy. It is compassion that brings about peace of mind, not anger and hatred, so we need to focus on the whole of humanity as being our brothers and sisters.”

His Holiness recommended putting negative experiences behind us and setting positive goals. He said, “it is possible to teach people to be more compassionate because we all have a seed of compassion from the start of our lives—we just have to nurture it. The key factor is to cultivate warm-heartedness.”