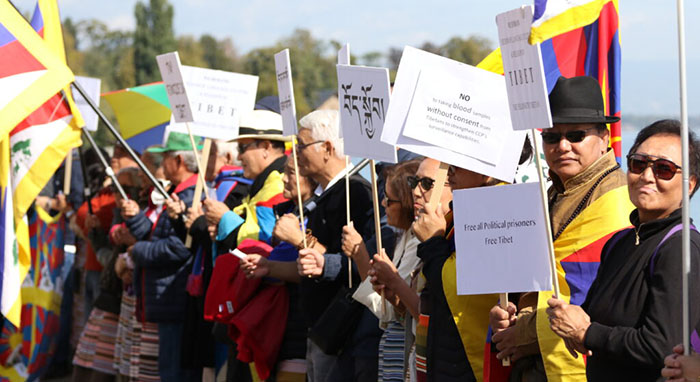 Tibetans protesting against China in front of the Palais Wilson on Friday, September 23, 2022. Photo: CTA

Geneva — Tibetans from Switzerland and Liechtenstein staged a demonstration against the Chinese government's violation of human rights in Tibet and asked the UN Human Rights Council to report on the human rights situation in Tibet.

The Tibetan community in Switzerland and Liechtenstein organized a demonstration on the deteriorating human rights situation in Tibet and raised awareness on Tibetan issues on the sidelines of the 51st regular session of the Human Rights Council in front of the Palais Wilson on Friday, September 23, 2022.

Thinlay Chukki, the representative of the Tibet Office in Geneva, said at the assembly, “To the United Nations, it is time that you to speak out on Tibet, you have been silent for quit some time, this silence is interpreted as you are not taking the responsibility over all human rights situation in the world, particular in Tibet. We, the Tibetan community in Switzerland and Liechtenstein, are gathered here to appeal to the United Nations, in particular the Human Rights Council, to break the silence and to denounce the human rights violations committed in China, in particular in Tibet. We call on the UN and its Human Rights Council to conduct independent investigations, monitoring and reporting on the human rights situation in Tibet.”

“Since 2019, we have been coming to you and appealing to you that the human rights situation in Tibet, Xinjiang, Hong Kong, and China as a whole has deteriorated and that there is an urgent need for investigation, monitoring, and accountability. However, you have ignored your own experts,” Representative Thinlay said.

“We all think it is time that you listen not only to the Tibetans, but also to the Hongkongers, the Uyghurs and your own experts. Recently, the High Commissioner for Human Rights issued a report on Xinjiang that clearly speaks of China's crimes against humanity in that region. Similarly, the Special Rapporteur on Contemporary Slavery has reported that the arrangements found in Tibet are very similar to the forced labor arrangements found in Xingjiang,” she added.

“The Special Rapporteur has gone a step further by stating that there are clear and reasonable grounds to believe that crimes against humanity may have been committed and has therefore called for an independent investigation. We reiterate his call and ask the United Nations, in particular the Human Rights Council, to conduct an investigation and, if this is not possible, to visit Tibet and report on the situation there,” Representative of the Tibet Office in Geneva urged.

The “Zero-Covid’’ policy in Tibet, the policy is used as a means of repression and oppression of Tibetans. We see videos and photos showing Tibetans suffering in so-called isolation centers, these isolation centers are not meant to treat patients, but to control, repress and oppress Tibetans. It is time for the UN to speak out on this issue. We call on the UN member states to put pressure on China, not only on the Covid policy, but also on the colonial-style boarding schools in Tibet, which are once again aimed at the genocide of Tibetan culture.