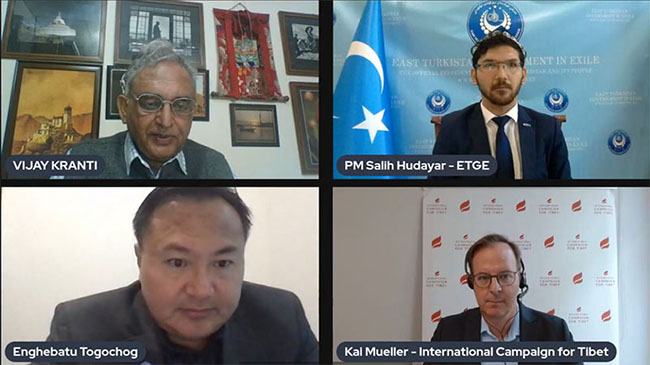 New Delhi — In today’s world when terrorism is being considered as a great threat to humanity, human civilization, and the rule of law, the colonialism and cultural genocide being practiced blatantly by China in Tibet, East Turkistan, and Southern Mongolia the world community should take note of it and confront it as the worst form of terrorism.

This was one of the common observations of experts in an international webinar, organised on the eve of China’s celebration of its ‘National Day’ on the coming first of October, 2022. The experts shared the fear that after adding Hong Kong to the list of its colonized territories China is now threatening to occupy Taiwan also.

As China is preparing for her annual ‘National Day’ and the ‘Golden Week Holiday’ which start on coming 1st of October, 2022, representatives of China’s three major colonies namely Tibet, East Turkistan, and Southern Mongolia joined hands at an international discussion platform to underline the serious colonial conduct of Chinese rulers against the citizens of these occupied countries.

The webinar entitled “Celebration of Colonialism by China', was organized by the Centre for Himalayan Asia Studies and Engagement (CHASE) and Tibetan Youth Congress (TYC) on Wednesday the 28th of September evening. The participants included Mr Salih Hudayar, the ‘Prime Minister’ of East Turkistan Government-in-Exile, who joined from Washington DC; Mr Enghebatu Togochog, a prominent leader and thinker among the South Mongolian diaspora from New York; Mr Sonam Tsering, General Secretary of TYC from Dharamshala in India and Mr Kai Mueller, Executive Director at International Campaign for Tibet (ICT) Germany from Berlin. Mr Vijay Kranti, Tibetologist, and Chairman CHASE moderated the discussion.

Mr Hudayar, the Prime Minister of the exile government of East Turkistan, which is known as ‘Xinjiang’ in China, said that many people are hoping that if the group headed by President Xi Jinping of China is deposed from power or if the rule of Chinese Communist Party (CCP) ends in China and a democratic system takes over, all problem caused by China will end. “But the real problem for the people of East Turkistan, Tibet, and Southern Mongolia is the colonial occupation of their respective countries by China. Unless the colonialist tendencies of the Chinese and their forced occupation of other countries end, there is no hope for these colonized countries,” he said.

Presenting a long list of atrocities being committed by the CCP rulers on the Uyghurs and other Turkic people of his country he said that the Chinese government brands every Muslim citizen of East Turkistan, as a ‘terrorist’ who supports a beard, speaks in his own national language, encourage other people not to smoke or drink and even those families whose any member is living abroad. He alleged that in addition to forcing the Uyghur women to go in for abortion, sterilization, or marrying to the newly settled Han men there are innumerable cases of organ harvesting from arrested Uyghurs for China’s international business of organ transplant. “The organs harvested from the Muslim Uyghurs are offered as ‘Halal Organs’ to international Muslim patients from abroad,” he said.

Mr Enghebatu Togochog who is the Director of the South Mongolian Human Rights Information Center (SMHRIC) in New York, said that nearly a third of the population of his country has been tortured to death by the CCP rulers since China occupied Southern Mongolia which is termed as ‘Inner Mongolia’ by China. “My country has been observing waves of Chinese Han settlers over past decades which have changed the demographic character of my country. The entire nomadic community of South Mongolia, who used to be a distinct part of the Mongolian identity, has been completely disbanded and their lands have been occupied for mining and settlement of Han settlers,” he said.

“The biggest danger to my country from China is the ongoing process of wiping out the original Mongol ethnic identity of our people by imposing the Chinese language and demographic manipulations through forced marriages of Mongol women with the Han settlers and other means. This is the same cultural genocide which CCP is practicing in Tibet and East Turkistan,” he added.

Mr Kai Mueller, who is a known expert on Tibet and a keen observer of China’s colonial system, presented a well analyzed view of the colonial rule and administration of Tibet, East Turkistan and South Mongolia by China’s communist masters. Saying that the world has understood colonialism so far only from the view point of the colonial powers from North America and Europe, but the world is changing and the Asian and African view on this issue is also emerging now. “I believe our Western view on China, on the Tibetans, the Uyghurs and the Mongolians needs to be decolonized. This explicitly requires adopting the perspectives of those colonized. Decolonization in this sense does not only entail restoring justice for those colonized, and accountability towards the colonizer, but also to decolonize the view on peoples that are ruled by a colonizing power,” he said.

He referred to the 1997 report of the ‘Unrepresented People’s Organization’ (UNPO) which was entitled as “China’s Tibet: the World’s Largest Remaining Colony”. This report said, “The PRC, a state which has been at the forefront of the struggle against colonialism and which has been a champion of colonised peoples, is today undeniably a colonial power itself.”

Equating the colonial rule of some European nations in Asia and Africa with that of what China is now practicing in Tibet, E. Turkistan and S. Mongolia Mueller said, “As colonizers, the Chinese state by all means needs to maintain the posture of the benevolent, liberating and caring ruler, who has brought progress and prosperity to a once backward and underdeveloped people…. A narrative that in its essence is deeply colonial and reminiscent of colonial rule in Africa and Asia by European nations, with its discriminatory and racist attitude. It is the attitude typical for the colonial power vis a vis the colonized people.”

Sonam Tsering, the General Secretary of the Tibetan Youth Congress, said that China has practiced every tool of colonialism in Tibet since its occupation seven decades ago. Referring to reports coming out of Tibet in recent days he said that Chinese authorities are running a campaign of DNA testing of every Tibetan subject under the garb of testing for Covid-19. He said that the serious mishandling of the Covid-19 situation by the Chinese administration in Tibet during the past two months has caused very serious problems for the Tibetan people. Latest reports show that at least five Tibetans committed suicide as a result of terrorizing conduct of the CCP administration and the hunger caused by this mishandling.

In his introductory remarks Mr Vijay Kranti, Chairman CHASE who moderated the discussion, pointed out a major contradiction in the communist theories of the CCP rulers of China and their actual conduct. He said, “It is very difficult to understand that on the one hand, China is celebrating their liberation from feudal rule and occupation of China by foreign colonial forces. They go to the extent of terming colonial occupation of their country by many European countries and Japan as ‘The Century of National Shame’. But on the other hand, they have no shame about the colonial occupation of Tibet, Manchuria, East Turkistan and Southern Mongolia. This arrogance is so deep that they can’t even tolerate it when the people of these occupied countries and their international supporters point out to the worst kind of colonial atrocities CCP is committing on these colonized subjects. And the worst part of the game is that after blatantly colonizing Hong Kong recently, the communist masters of China are threatening to impose their colonial rule over Taiwan also.”

Dr Aayushi Ketkar from the Special Centre for National Security Studies at JNU who handled the question-answer session of the webinar also pointed out that one of the major challenges before the victims of Chinese colonialism is to challenge the narrative which China has built up on the strength of its economic and military power over the years.