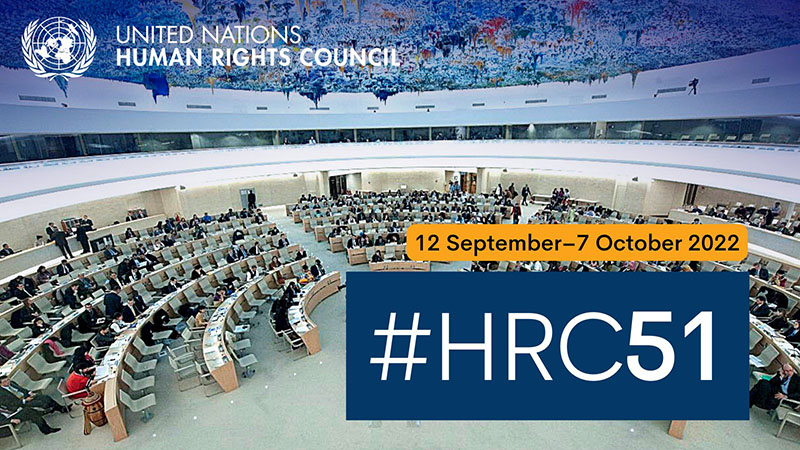 The 51st session of the UN Human Rights Council in Geneva. Photo: file

Geneva — At the 51st session of the UN Human Rights Council in Geneva, 27 UN member states, including the United States, Denmark, Germany, Sweden, Switzerland, Lithuania and the European Union, expressed their concern at the serious human rights violations and systematic repression in Tibet by the Chinese government.

During the 51st session of the UN Human Rights Council, currently taking place in Geneva, UN Member States have expressed their concerns about China's systematic repression in Tibet and East Turkestan. The EU also calls on China to unconditionally release Gosherab Gyatso, Dorjee Tashi, Rinchen Tsultrim and other Uighur, Chinese and Mongolian human rights defenders who are imprisoned by the Chinese authorities.

The United States, Denmark, Germany, Sweden, Switzerland, Lithuania and the European Union, on behalf of 27 Member States, expressed their concern about the situation in Tibet, while drawing attention to China's human rights violations.

The US delegate expressed concern about China's serious human rights violations in China and other regions. With regard to Tibet, the US remains concerned about "the severe repression of Tibetans and their distinct religious, linguistic and cultural identity" in Tibet.

Speaking on behalf of the 27 Member States, the Czech Republic said that the latest documents confirm the seriousness of the human rights situation in China, including in Tibet.

Furthermore, Sweden remains deeply concerned about the human rights situation in China, including in Tibet. Sweden urged China to "respect international law, including human rights, in particular the right to freedom of expression and the rights of persons belonging to minorities."

Delegates from Japan, Iceland, Finland, the Netherlands, Luxembourg and the United Kingdom, as well as others, continued to express their concern about China's human rights violations.