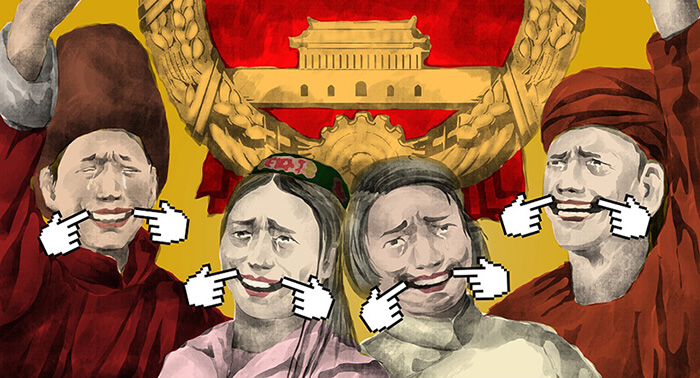 The Australian Strategic Policy Institute (ASPI) examined 1,741 videos posted on 18 increasingly popular YouTube accounts featuring influencers from the troubled border regions of East Turkestan (Xinjiang), Tibet and Inner Mongolia, most of which were created in 2020 and 2021 and they have large numbers of followers on the accounts.

ASPI released the report (Frontier influencers: the new face of China’s propaganda) on October 20, 2022 and stated that the content of the ethnic minority youth and female influencers was directly commissioned by the Chinese party-state and warned that these influencers are attempting to whitewash human rights violations in East Turkestan, Tibet and Inner Mongolia.

“This report explores how the Chinese party-state’s globally focused propaganda and disinformation capabilities are evolving and increasing in sophistication. Concerningly, this emerging approach by the Chinese party-state to influence international discourse on China, including obfuscating its record of human rights violations, is largely flying under the radar of US social media platforms and western policymakers,” the report stated.

“Despite being blocked in China, YouTube is seen by the CCP as a key battlefield in its ideological contestation with the outside world, and YouTube’s use in foreign-facing propaganda efforts has intensified in recent years. Originally deployed on domestic video-sharing platforms to meet an internal propaganda need, frontier-influencer content has since been redirected towards global audiences on YouTube as part of the CCP’s evolving efforts to counter criticisms of China’s human rights problems and burnish the country’s image,” the report mentioned.

“For the mostly young and female Uyghur, Tibetan and other ethnic-minority influencers we examine in this report, having such an active presence on a Western social media platform is highly unusual, and ordinarily would be fraught with danger. But, as we reveal, frontier influencers are carefully vetted and considered politically reliable. The content they create is tightly circumscribed via self-censorship and oversight from their MCNs and domestic video platforms before being published on YouTube. In one key case study, we show how frontier influencers’ content was directly commissioned by the Chinese party-state,” the ASPI's report stated.

“Because YouTube is blocked in China, individual influencers based in the country aren’t able to receive advertising revenue through the platform’s Partner Program, which isn’t available there. But, through their arrangements with YouTube, MCNs have been able to monetise content for frontier influencers, as well as for hundreds of other China-based influencers on the platform. Given that many of the MCNs have publicly committed to promote CCP propaganda, this arrangement results in a troubling situation in which MCNs are able to monetise their activities, including the promotion of disinformation, via their access to YouTube’s platform,” the report said.

“The use of professionally supported frontier influencers also appears to be aimed at ensuring that state-backed content ranks well in search results because search-engine algorithms tend to prioritise fresh content and channels that post regularly. From the CCP’s perspective, the continuous flooding of content by party-state media, foreign influencers and professionally supported frontier influencers onto YouTube is aimed at outperforming other more critical but stale content,” it stated.

“The videos show a standardised, secular and pristine image of these regions, with women who are modern, sinicised and show loyalty to the Chinese Communist Party. This subtle propaganda shows a vision of President Xi Jinping’s ‘beautiful China’, one that is scrubbed of politics and religion and instead shows an idyllic natural environment and innocuous elements of culture such as cooking or dancing,” the report stated.

“In some of the videos, however, the influencers also explicitly push back on established international human rights abuse concerns. As one of the influencers puts it, ‘People are happy and all ethnics are living together harmoniously,’ the report added.

“The Chinese party-state has invested heavily into building a global network of news agencies, websites and social media accounts to promote its world view outside of China. In recent years, that effort has increasingly involved a high degree of experimentation with resources devoted to digital influence operations on foreign social media platforms that are blocked in China, as well as foreign influencers who are used to promote CCP narratives back to a domestic audience,” the report concluded.