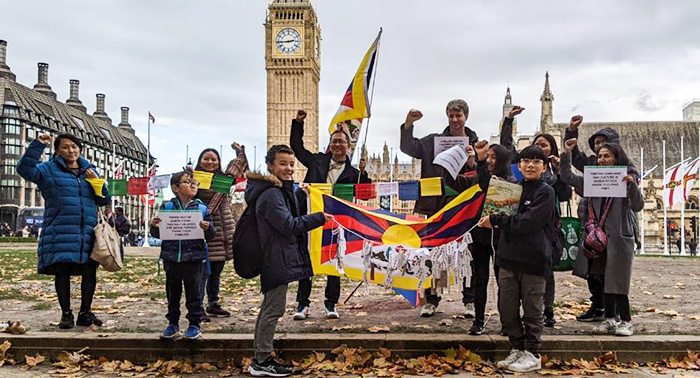 London — Tibetan activists and supporters in England marked World Children's Day 2022 by calling for the protection of Tibetan children in Chinese colonial boarding schools, where China is attempting to convert Tibetan children into Chinese and eliminate the unique linguistic, cultural and religious identity of the Tibetan people.

Tibetan community in the UK and Free Tibet observed World Children's Day 2022 at Parliament Squre in London, England on November 20, 2022, to raise awareness of the fact that one million Tibetan children (aged 4 to 18) inside occupied Tibet are forcibly separated from their parents and families and placed in Chinese colonial boarding schools in a deliberate attempt by the Chinese Communist Party (CCP) to convert Tibetans to Chinese and to completely eliminate the unique linguistic, cultural and religious identity of the Tibetan people.

A group of Tibetan parents and their children joined them from the local Tibetan language school at the weekend and they hold banners that read: "one million Tibetan children taken away from their parents by the Chinese government," "three out of four Tibetan children forced to leave their families," "World Children's Day, protection of Tibetan school children," "Tibetan language and culture under attack in occupied Tibet."

"This system is fundamentally distinct from normal boarding schools in that attendance is coerced and the curriculum targets “ethnic minorities” in an effort to undermine Tibetan culture and assimilate Tibetan children to Chinese identity. In effect, this system inflicts severe mental and emotional distress on Tibetan children and threatens Tibetan culture, language, and way of life!", Students for a Free Tibet said on the World Children's Day 2022.

"China is using a massive network of mandatory boarding schools to rip Tibetan children from their cultural roots in order to raise them to identify as Chinese. These schools threaten the very survival of Tibetan language and culture. World leaders need to speak out against this genocidal policy!," Tibet Action Institute stated.