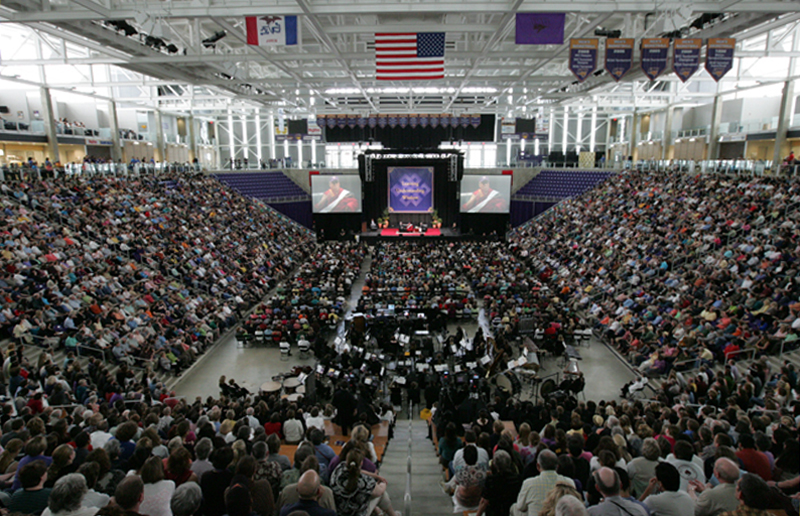 Dharamshala: Tibetan spiritual leader, His Holiness spoke at the McLeod Centre at the University of Northern Iowa (UNI), Cedar Falls, Iowa, during his first ever visit to the state on Tuesday 18th May.

The day's proceedings were split into three events, beginning with a morning discussion entitled ‘Educating for a Non-Violent World', in which the panel spoke about educating both the ‘head and the heart' and promoting non-violence. Other topics covered included ideas on how individual and societal ethics can be used to conquer violence and promote peace. To end the morning talk, the Provost of the university, Gloria Gibson, presented His Holiness with a purple ‘Panthers' (the University football team) sun-visor, much to the delight of the crowd.

In the afternoon, His Holiness received an honorary humanities degree from UNI President Benjamin Allen, for his dedication to promoting positive human values such as love and forgiveness. The university has been linked with Tibet for 16 years as one of a handful of universities participating in the Tibet Fund. As part of the programme, the institute has welcomed on average three students from Tibet annually and has totalled an enrollment of 30 Tibetan students over this time.

At 2pm His Holiness gave a keynote speech entitled ‘The Power of Education'. Referring to his own education, His Holiness the Dalai Lama revealed that he was in fact a ‘lazy' student in his youth, generating laughter from the 5,400-strong sell-out crowd. On a more serious note, His Holiness urged UNI lecturers to develop a syllabus that included more teachings on moral ethics and the ‘education of the heart'. The talk highlighted the way in which such an education should be used to resolve current world conflicts. His Holiness emphasised the eternal value of education, as knowledge is something that ‘nobody can steal'.

His Holines the 14th Dalai Lama of Tibet received applause for his comment that we must respect all religions, saying they provide not only a day-to-day perspective, but also a long-term vision. But he said it doesn't really matter what religion you are. "My religion is very simple. My religion is kindness."

Speaking to the focus of the forum, the Dalai Lama said, "Education brings about knowledge, education brings equality, but education alone is not sufficient. We must have more sensitivity to what people think."

He said we need to educate both mind and heart to create peace, and it needs to start early in life. "Whenever we saw some conflict or disagreement the instinctive response is how to force. Using force or violent attitude always bring more trouble. From kindergarten must teach whenever you see conflict using force is the wrong method."

Fundamentally, he said, we are human beings, then faith, color or gender, these are secondary. "I am always telling people many problems we are facing today are man-made problems. Most of these problems have too many emphasis on wealth, gender, race, forget it, fundatmentally we are the same human being."

The university reported that the day's events had helped raise a total of US $32,000, which will be used in aiding future Tibetan student scholarships.

His Holiness the 14th Dalai Lama of Tibet was welcomed to the University of Northern Iowa by a sell-out crowd of more than 5,400 people in the McLeod Center. Just as with the morning sesson, the Dalai Lama took the stage for his afternoon keynote to a great deal of applause.

Following on from his visit to Cedar falls, His Holiness will continue his tour to New York.