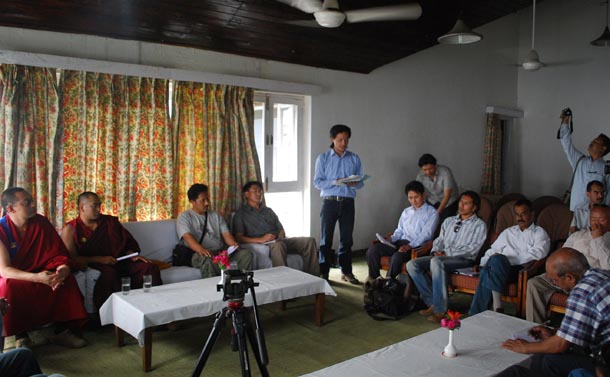 Dharamshala: “Press and media” correspondent for Indian Express said “is the forth pillar of democracy,” on World Press Freedom day, the Association of Tibetan Journalists (ATJ) held a meeting in solidarity against the suppression of the freedom of the press. 5o local journalists attended the meeting and participated in discussions about the challenges facing journalists in the community, and about the necessity of freedom of expression (FEX).

Freedom of expression is a fundamental human right as stated in Article 19 of the UN Declaration of Human. Reporters Without Borders documents that from 2008 until today, 889 journalists were arrested or imprisoned, were 79 killed and world wide, China, is the 6th worst offender of freedom of expression, only Vietnam, Cuba Turkmenistan, North Korea, and Eritrea have worse rankings than China.

Tashi Wangchuck, president of ATJ said in a press release, “if the claims made by the Chinese government of Tibetans enjoying the ‘economic boom’ and ‘cultural and religious freedom’ in Tibet it should allow independent international media into Tibet.”

He continued, “We are ready to visit the Tibetan areas to observe the situation independently and we expressed our willingness to do so.  So far, we have received no response from Chinese government.”

Suresha Katta spoke on behalf of Dharamshala Press Club, Mr. Katta spoke about the need for close relationships between Indian, Tibetan, and foreign journalists, emphasizing that close ties between the two groups will better serve all journalists working in the community.

Commenting on the imprisonment of journalists in North Korea and Iran, Reporters Without Borders said, “ Saberi, Lee and Ling are professional journalists who are neither spies nor criminals. Through them, press freedom and the right to report the news freely are being taken hostage by Iran and North Korea.”ATJ shares Reporters Without Borders sentiment and views the actions of Iran and North Korea as an affront to basic human liberties.

ATJ has 40 members who are committed to providing fair and balanced news to the global community so as to empower individuals to find their own voice and use their knowledge to exercise the fundamental human right if freedom of expression.