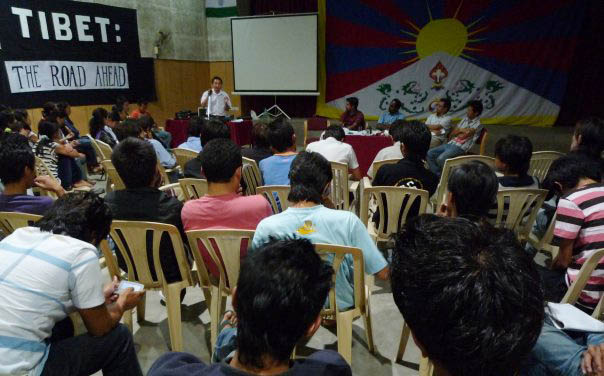 Dharamshala: Tibet Talk and Thenthuk, an organized a discussion forum which took place yesterday between Geshe Lobsang Gyaltsenla, an ex-political prisoner and Doctor of Buddhist Philosophy, and about 25 attendees - mostly foreigners and local Tibetans; all shared their ideas concerning Tibetan issues. When Geshe Lobsang was last in Tibet, he hadn’t heard about middle-way approach for Tibetan autonomy – he protested for the independence of Tibet. Prisoners are detained for nearly a year prior to sentencing. Lobsang served nine months and was released, but most are charged with attempting to subvert the Chinese Constitution and sentenced to serve for several years. “Separators,” who fight for Tibet’s recognition as a sovereign entity, removed from China. “Revolutionaries.” These are the charges. Sentences are subject to extension, and depend on the person’s role in the protest in which he or she partook, or the gravity of his or her subversive action.  After prison, many Tibetans come to India.

Another former political prisoner, who was released in 2005 after serving for thirteen years, speaks of deteriorating conditions in Chinese prisons. The newer facilities are externally aesthetically appealing, but of significantly lower standards; they are smaller and utterly congested.

Prior to his arrest, Lobsang learned that Chinese prison guards will use intimidation tactics to extract information from the prisoners. All who choose to demonstrate anticipate the challenges of life in prison. Everyone faces the probability of torture.  Once he protested with his older brother, whom the Chinese government arrested upon learning of Lobsang’s residence amongst the Tibetan Government in Exile in Dharamsala, India. He spent three years in prison and died. He calls this the short story of his brother; he was already in India at the time of his death. His family in Tibet cannot risk explaining the cause or circumstances of his death because phone conversations are frequently monitored by Chinese authorities. Geshe Lobsang only prays for the answer. There is a kind of tradition in Chinese prisons: authorities prefer to relinquish responsibility for those in critical condition and release tortured prisoners to their families; thus many die at home.

If a Tibetan who works for the Chinese government has a relative in India, he is subject to losing his job and will face obstacles in furthering his studies. If this person has served in prison, his chances of obtaining a government job are slim. He can seldom call his family. When he does, they cannot even utter the name of the Dalai Lama.

Chinese law asserts the right to a speedy trial and subsequent sentencing. Police and the army conduct arrests, but it is the prison guards who are responsible for the torture. Lobsang showed weariness and disinterest in political activity and an overwhelming desire to be free of political constraints, and he expressed his feelings of disillusionment and bitterness towards an oppressive society. It is not the Chinese people, he emphasizes, it is the government. And it is important to observe that distinction.

Last year’s demonstrations in Tibet, which occurred on the tenth of March, sprouted from repression. They were an outcry, an expression of suffering. Tibetans burned Chinese shops, and those who participated in the destruction were promptly and forcibly detained.

According to written Chinese law, if a Chinese person kills a Tibetan, or vice-versa, his crime will be punished by death. But last year 220 Tibetans were killed, and no clarification was provided by the Chinese government and no consequences or investigations ensued.  In the case of accidental death, if a student or member of the Chinese army is killed, the person responsible will be fined between thirty and forty thousand yen. If a monk is killed, the fine is only one thousand yen.  There is no support for Tibetans in prison – most are denied visits with their families. Upon release, Lobsang underwent a process of reeducation.

Tibetan protest movements appear spontaneous. People react to the dehumanization and repression instigated by the Chinese government. Agitation comes not from external influence, but from inner reserves of frustration; they uprisings are seldom organized.

During the last Olympic Games, which took place in Beijing, the Chinese government funded housing improvements to appease international criticism and show that Tibetan lives were improving, yet ceased to sell tickets to Tibetans for fear of agitation during the event, in front of the entire world. In Tibet, restrictions on movement proliferated, and many people disappeared. Internationally, awareness of the Tibetan issue increased. Lobsang believes that the Olympic Games symbolize harmony and friendship between all nations, but emphasizes that the Chinese government failed to respect human rights within their own country. Even some individual athletes withdrew from the Olympics as a show of solidarity and respect for human rights. But he saw the Olympics used as a political tool and as a symbol of hypocrisy. He states that international pressure can occasionally cause more internal harm than good. But certain prisoners’ sentences have been reduced, and some have been released. Still, the Chinese government refuses to acknowledge the Tibetan question as a human rights issue.  International human rights organizations have best effected change by focusing on a single case at a time.

Geshe Lobsang Gyaltsen simultaneously represents both the global and the local. Today, Tibet is in a state of minimal outside influence. He, like most Tibetans in exile, harbors unbreakable ties to his homeland. He believes the end of the suffering of the Tibetan people depends upon Tibet’s continuing development of a modern education system, the establishment of political relations with the outside world, and the education of Chinese youth. He urges us to find stories and take them home, to spread awareness of Tibetan culture to prevent its death, which he perceives would result from assimilation with China.