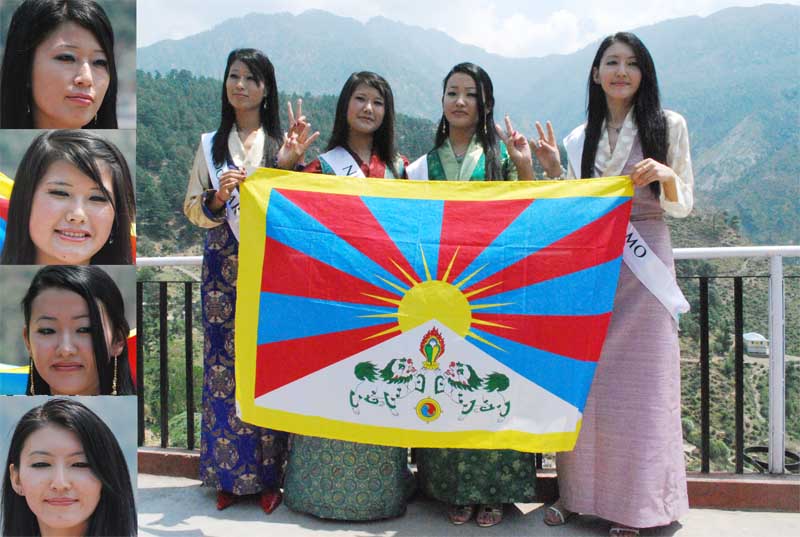 Dharamshala: Lobsang Wangyal, director of Miss Tibet held a press conference to introduce the four Miss Tibet candidates in the Miss Tibet pageant 2009, today begins one week of training for each of the contestant.  This year, the pageant will promote the message "thank you India for 50 years of help and hospitality.”  Mr. Wangyal said "it is an opportunity to celebrate 50 years of Tibet on the world stage.  The spirit of celebration is high, but we pay homage and salute to those brave Tibetans who have laid down their lives for their belief in freedom, justice, and love for Tibet."

The four contestants are; Dolkar, 24 from Dehra Dun; Ngawang Choying, 18 from Darjeeling; Tenzin Choezom, 20 from Dharamshala; and  Yeshi Lhamo, 24 from Bir.   One lakh rupees will be awarded to the winner, the first runner-up will be presented 50,000 rupees while the second runner-up will be given 25,000 rupees. The fourth place will receive a token prize of 5,000 rupees.  The contestants are encouraged by the cash prize but they are primarily encouraged by the potential to serve their community as Miss Tibet.

Mainly Lhamo would like to improve her education, and she thinks this is a good opportunity.  She was asked what she can do for Tibet if she wins Miss Tibet 2009; "I am very happy to participating in this event whether I will win or lost, every competition has this two, so it is a nature" she said.

Ngawang agrees that as Miss Tibet one is able to "contribute and do many things for Tibet and Tibetan people, and as being a Tibetan nationality, we should use this platform to gain more supports from international communities"

There will be three days of competition starting with the swimsuit round on 5 June. Talk and talent rounds will he held the following day. On the finale night on 7 June, there will be four rounds: Introduction, Evening gown, Traditional costume and Interview.  Crowning will be followed next with the presentation of the prize money. Spice India Splendor is sponsoring the event this year.

Tenzin Choezom commented on the pageant, "clapping for others' events and watching others' entertainment is not enough, Tibetan women should take a responsibility to walk together with other women ‘shoulder to shoulder’.  This is the epitome of our feminine strength and our voice will be heard by many around the world."