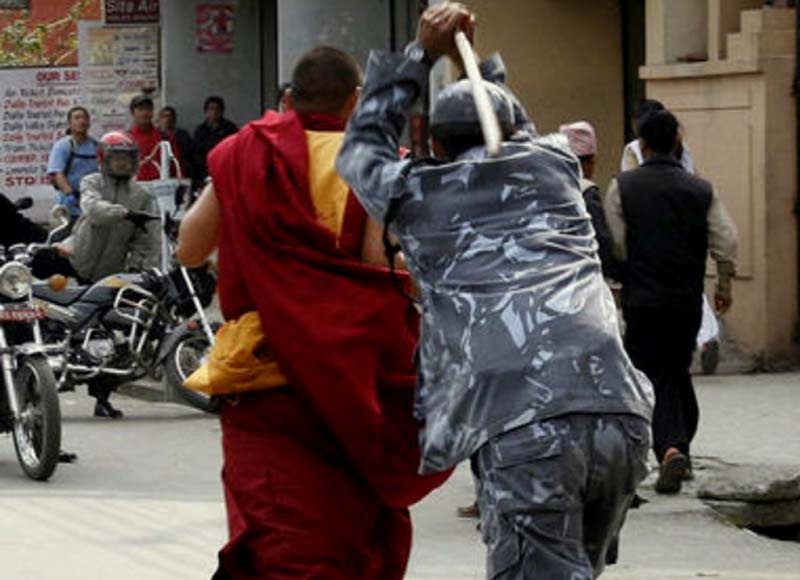 Dharamshala- 39 Tibetans have been arrested in Kathmandu in a strategy aimed to prevent public celebrations of the Tibetan spiritual leaders; His Holiness the Dalai Lama, and His Holiness the17th Karmapa Ogyen Trinley Dorje.


Tibet's spiritual leader, His Holiness the Dalai Lama, will be 76 years old tomorrow. However, due to mounting pressure from Beijing, and amid huge aid packages, leaders in Kathmandu have co-ordinated crackdowns in the region which acts as a corridor between Tibet and India; against the refugee community.

The Ambassador to Nepal, Qui Guohong, was recalled by China before he finished his entire term in Kathmandu, reportedly due to the fact that officials in Beijing were disappointed at the way anti-Chinese protests had continued in the region.

Worryingly, Nepal currently remains committed to the ‘one China' policy; which deems Tibet as part of China. It also places Nepal shoulder to shoulder with China on its policy on anti-Chinese protests; a breach of international human rights and free speech.

The 39 arrested Tibetans, from the Boudha region of the Capital; were part of a large Tibetan settlement in the city.

According to various reports, there 47 Tibetans remain in detention, which includes 12 Tibetans who were detained on June the 12th to honor their solidarity with Tibet and His Holiness the Dalai Lama.

The restrictions facing Tibetans in Nepal are growing. On vigils, photographs of the Karmapa and the Dalai Lama of Tibet are banned. On Sunday, Tibetans attempted to publicly mark the 17th Gyalwa Karmapa's birthday, however this was prevented by Nepalese police forces; the first time a disruption has occurred on the annual, sacred event.

Instead, the vigil was limited to within the courtyard of a small, local monastery. The Tibetan national flag, and the Nation's anthem, were banned, as well as banners and photographs of spiritual leaders.

A report from the ICT, a Tibetan NGO based in US states that over 50 police were stationed in the monastery grounds. Additionally, riot police were spread across the city to prevent Tibetans accessing celebration sites.

It is also reported that three members of Nepalese police personnel entered the monastery hall where prayers were being conducted. They are said to have questioned the organizers.

Nepal is home to around 20.00 exiled Tibetans. It faces growing pressure from Beijing over the Tibetan situation, despite international outcry to respect the rights of Tibetans entering the nation. The Chinese Government invests millions to Nepal with 'Aid' packages. In March, China gave the Nepalese military and weapons assistance with a value of around US$ 20 million.

Tibetans and Buddhist followers living in Sikkim celebrated the 27th birthday of His Holiness the 17th Gyalwa Karmapa Ogyen Trinley Dorjee. Thousands of devotees across Sikkim chanted hymns praying for peace and harmony while performing with traditional ritual instruments. According to Sikkim Times, of the more than 150,000 Tibetans now living in exile in various settlements across India, Nepal and Bhutan, nearly 130,000 also celebrated the Karmapa Rinpoche's birthday.