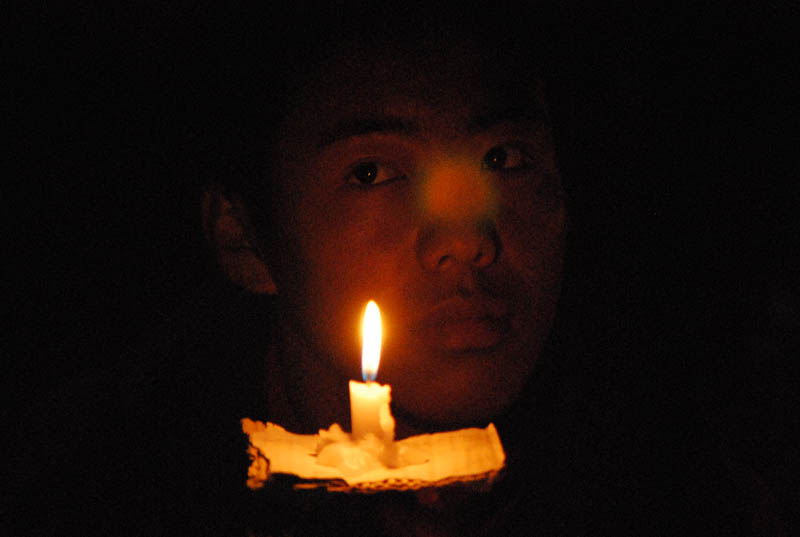 Dharamshala: - After killing more Tibetans by armed Chinese security forces in eastern Tibet, a candlelight vigil was held by Tibetan youth group at the main Tibetan temple of Dharamshala in memory of those who shot dead in two separate incidence of fresh Tibetan protest demonstrations. The Tibetan youth also called on China to withdraw its military crackdowns in Tibet.

"In two separate incidences of Tibetan demonstrations in Eastern Tibet, Chinese security forces fired at crowds of Tibetan farmers and monks, leaving behind at least 8 people dead and more than thirty wounded with bullets in their chest, stated in a statement by the regional Tibetan Youth Congress in Dharamshala.

"Regional Tibetan Youth Congress (RTYC) has learned from different sources from Tibet that Drakgo town saw a protest uprising by participated by hundred of people from the town and nearby villages, like Gephen Lukokma and Drakgo Norpa. According to eyewitnesses who reported from Drakgo, Tibetans were intimidated by Chinese security forces, who randomly started arresting people on the suspicion that they may commit self immolations," said RTYC.

'More than 200 people have been arrested Monday morning. 23rd January,2012, purely based on a rumors that a wall poster that had threatened self-immolation by four people on that day. As the protesters demanded freedom for Tibet and return of His Holiness the Dalai Lama to Tibet, Chinese security forces fired at the protesting crowds, leaving behind at least six dead and many wounded with gun shots in their chest," it added.

"In a separate incident in Serta town. Again in eastern Tibet of traditional Kham province. A protest that burst out Tuesday morning, January 24th, security forces fired at the protesters, leaving at least two people dead and many wounded.

RTYC is constantly in touch with people who are receiving information from Tibet. We are gravely concerned about the lives of nonviolent protesters, especially those who are wounded with gun shots. We demand that the Chinese government immediately treat them and unconditionally release the arrested.

As we lead this candle light vigil in Dharamsala to protest police firing in Kham Drakgo yesterday and Serta this morning. We say prayers for the martyrs and mark our solidarity with our people in Tibet who are braving the worst of brutalities under the Chinese occupation over all. after 2008 Tibetan national uprising the Chinese government has scaled up its security presence across Tibet and turned Tibet into a military zone by keeping security forces at ever corner and streets in Tibet.

We request the Indian Government and the people , and the international community to ask the Chinese government to respect Human Rights in Tibet and immediately withdraw their security crackdown in Tibet."