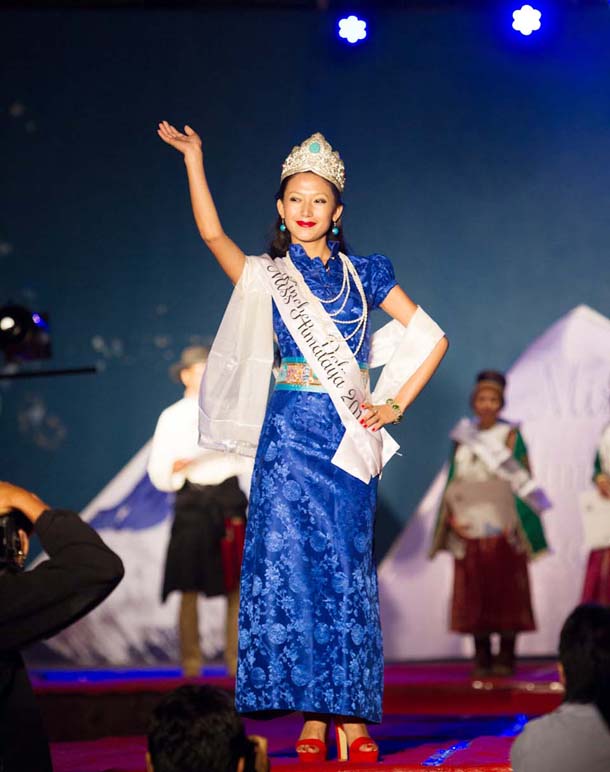 Dharamshala: - Rinchen Dolma, 23-year-old Himalayan girl from Sikkim was crowned the Miss Himalaya 2012 in the Himalayan town of McLeod Ganj on Saturday night. She is a final-year college student from Chandigarh, was determined the winner among the five contestants by a panel of three judges, organiser said.

After winning the Miss Himalaya crown, she said, "Goals are brain work and foot work; dreams are heart work."

"I have always followed my dream. Today I am feeling proud and honoured to achieve the title Miss Himalaya 2012. I want to thank my family who were always there to support me to overcome every hurdle in life. I would also like to thank the organisers for giving us such a beautiful opportunity.

"Additionally, I would like to convey this message to all the youngsters that it is not only about winning or losing but it's about gaining an unforgettable experience and meeting wonderful people."

According to the event organisers, the show began with a performance of Snow Lion and Yak dance before a backdrop of a snow mountain range. The Director of the pageant introduced the idea and the mission of the Miss Himalaya Pageant event. During gathering, a tribute of solidarity was paid to the Tibetans who died for freedom of Tibet. A minute's silence was also observed to express public support and solidarity with the people of Tibet.

The contestants then took to the stage for their Introduction round. This was followed by the presentation of the Traditional costume round. In the final Interview round, the judges asked different questions to the contestants. The pageant concluded with a modest coronation ceremony and presentation of awards.