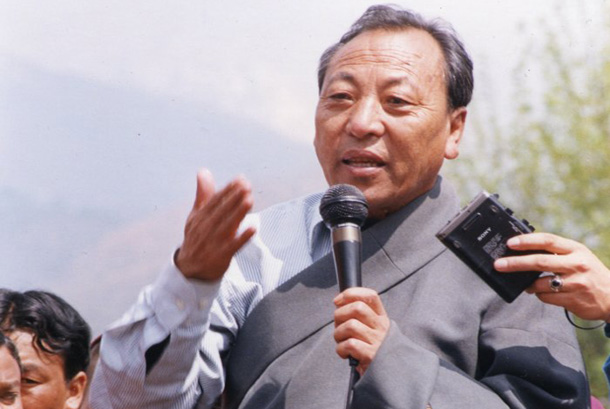 It is believed that 71-year-old Topgyal, who served the Central Tibetan Administration (CTA) for almost 50 years, and led the exiled Tibetan government between 1997 –  2001, passed away at his home, in Lower Dharamshala, after fighting a long battle with stomach cancer.

“He was really a jolly person,” said Chairman of the Public service Commission and Chief Election Commissioner, Jampal Chosang, who worked with Topgyal in the Department of Information.

“He was one of the foremost Tibetan civil service officers who put all the energy and expertise he had to the common purpose, but he was always very casual and never cared for anything about himself, such as his dress.

“He was very learned and especially good in Tibetan language and literature. He was very good in Chinese politics also. He didn’t speak English, but he always understood what someone was saying when they made a comment in English. He also had quite an extensive knowledge of Hindi literature which is very unusual among the Tibetans.”

Tibet’s current political leader, Sikyong Dr Lobsang Sangay, has since visited Topgyal’s family home with his cabinet colleagues to express his “deep condolences”, and a CTA spokesperson added that it would hold a prayer service in the former Prime Minister’s memory, following which its offices would remain closed, on December 31.

According to the CTA, Topgyal was born in Chamdo (Chengdu) Kham, in 1941, and in 1959 was among the first wave of Tibetans to flee his homeland following the Lhasa uprising, escaping to India, where the following year he began studying at the Central University for Tibetan Studies, in Sarnath, near Varanasi.

After working as a researcher at Benares Hindu University, Topgyal joined the CTA in 1963, and in 1971 became a deputy secretary at the Department of Information.

Rising through the ranks, he was transferred to the Cabinet Secretariat (Kadrung) five years later, before returning to the Department of Information as its secretary in 1980. Three years later he was selected to join the public service commission, and in 1993 was nominated to the 10th Kashag (cabinet) where he served as minister for the departments of Home and Health, before becoming Kalon Tripa in April, 1997.

Alongside his distinguished political career, Topgyal was one of four founder members of the largest pro-independence NGO in exile, the Tibetan Youth Congress, and in 1968 helped found Tibetan language magazine, Sheja, which remains in print today.

In July 1993, when secretary of the Department of Information, Topgyal visited China along with Kalon Gyalo Thondup, where they met the director of the Chinese Communist Party’s United Front Work Department, Wang Caogo, to whom they delivered a letter and memorandum on behalf of the Dalai Lama.

Topgyal is survived by his wife and three daughters.