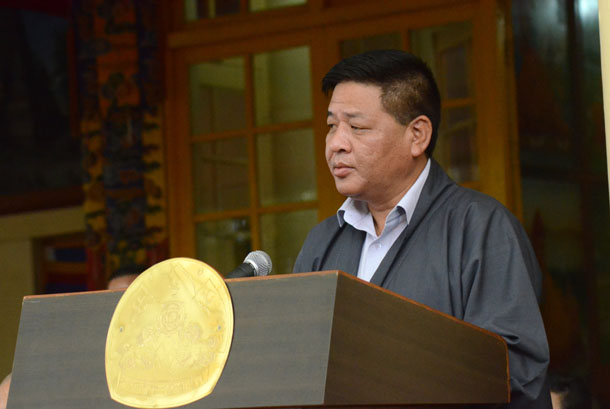 Dharamshala: - An appeal from the Tibetan Parliament-in-Exile concerning the incident of bomb explosions which occurred at the highly sacred, Mahabodhi Temple, Bodh Gaya in Bihar State of India.

Around 5:30 in the morning of 7th July 2013 a total of ten bomb explosions occurred within the complex of the Mahabodhi Temple, a supremely sacred site to the followers of the Buddhist religion.

The bombs exploded around the sacred Bodhi Tree , as well as at locations not far from the Mahabodhi Temple, including the Tergar Monastery, the seat of the Gyalwang Karmapa, and around the big statue of the Buddha built by the Japanese.

Two Buddhist monks were seriously injured and taken to hospital for emergency medical treatment. The temple itself and its main Buddha statue did not suffer any serious damage. Nevertheless, it is a matter of extreme sorrow and sadness which cannot be expressed in words that such serious bomb explosions have taken place at such a sacred place of peace and non-violence.

In order that incidents of this kind may not be repeated in future, the Tibetan Parliament-in-Exile has written to the Prime Minister of India and the Chief Ministers of the states of Himachal Pradesh and Bihar.

The Tibetawn Parliament urged both the central and the concerned state governments to conduct a thorough investigation into the incident, enhance the level of security for the Buddhist places of worship and in particular, for a heightened level of protection to ensure the personal safety of His Holiness the Dalai Lama and the Gyalwang Karmapa.

Likewise, it is imperative that the heads and leaders of the major lineages of Buddhism and their monasteries, should also pay close attention to the security aspects of their respective places.

In accordance with His Holiness the Dalai Lama's statement issued after the bomb explosions and in keeping with his usual advice.

It is very important that human lives should be valued as precious, peace and non-violence should be safeguarded and there should be a mutual show of respect and reverence between the different religious faiths in this world.

We likewise appeal to the responsible people in all different societies and communities to follow the same.