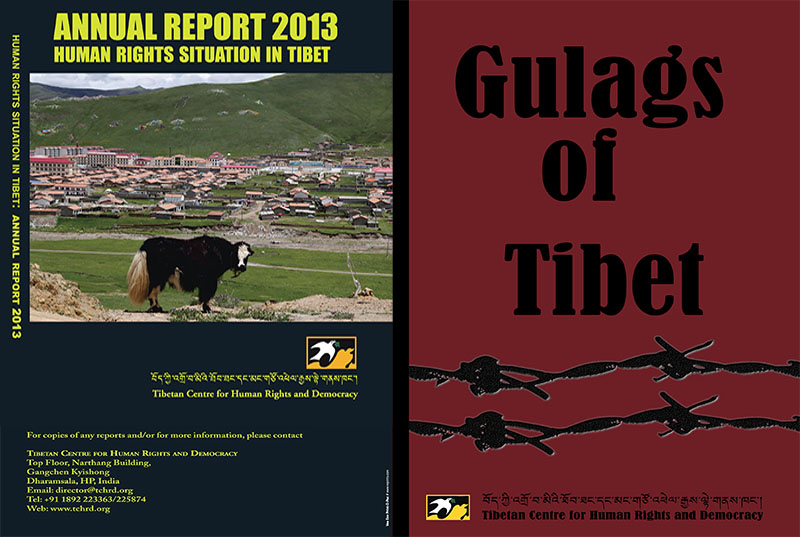 Dharamshala: - The Dharamshala, India based Tibetan Centre for Human Rights and Democracy (TCHRD) released on 20 January its 2013 Annual Report on the human rights situation in Tibet and 'Gulags of Tibet', a special report on Re-education Through Labour (Ch: laojiao) system in the region.

According to the report, there are a total of 896 political prisoners in Tibet and as many as 119 Tibetans who are still being detained, arrested or sentenced in 2013 alone.

The Tibetan group said its '2013 Annual Report' focuses on Civil and Political Rights, Religious Repression, Economic, Social and Cultural Rights, Religious Repression, China's development strategy, and self-immolation protests. 'The theme of the report is the continued implementation of nomad resettlement and relocation policy. Tibetan nomads have been forced from their ancestral lands and resettled/relocated in urban areas, mostly against their wishes and without adequate compensation,' it added.

The newly built urban areas where they are forced to resettle cannot sustain their centuries-old way of life, and compared to Chinese migrant workers, nomads receive less state support in terms of finding employment and other sources of livelihood. It was widely estimated that 90% of all Tibetan nomads in Qinghai Province would be resettled at the end of 2013.

"Despite claims to the contrary, the primary reason for the forced relocation of the nomads is to exploit rich mineral resources from the nomadic lands. State-owned mining companies have already begun the massive extraction of precious minerals such as lithium, copper, chrome, gold and oil," TCHRD said.

The report also includes research papers produced in collaboration with human rights students at the University of Guelph in Ontario, Canada.

TCHRD's special report, 'Gulags of Tibet' examines the history and evolution of RTL, analyzes the current RTL laws, in addition to examining how RTL violates the international prohibitions of arbitrary detention, forced labor, and torture. The group said that the report features interviews with Tibetan RTL survivors who tell their personal stories of being locked up in forced labor camps.'

The exiled rights group said that "in late December 2013, China announced the abolition of RTL, a form of arbitrary detention used by the Chinese government for over 50 years to imprison political dissidents and other opponents. The failure of previous reform measures to address the human rights abuses that define RTL creates skepticism as to what the abolition of RTL will actually entail."

For the abolition of RTL to be meaningful it must fully abolish RTL in name and function. 'Since the Third Plenum various organizations have alleged that the reform will be cosmetic—simply renaming RTL facilities and expanding other forms of arbitrary detention—rather than substantive,' it added.

The PRC has attempted to refute these claims, but until transparent action is taken that abolishes RTL skepticism will remain. Abolishing RTL in all its forms requires stopping the human rights abuses, such as arbitrary detention, forced labor, and torture, that are inherent in RTL and affect everyone in the PRC.

'Eight of the 47 countries that hold seats on the United Nations Human Rights Council imprisoned people in 2013 under laws that restrict religious freedom,' the Human Rights Without Frontiers International, a nonprofit advocacy organization based in Belgium said in a new report released earlier this month.According to the report's findings from 2013:
In China, Protestants, Catholics, Buddhists, Muslims and Falun Gong adherents were arrested for proselytizing, holding illegal gatherings, providing religious education classes and publicizing their persecution.

"Human Rights Without Frontiers is alarmed by the evolution of the U.N. Human Rights Council which accepts as members an increasing number of countries perpetrating egregious violations of human rights and, in particular, of religious freedom," the group said in a statement.

The UNHRC replaced the U.N. Commission on Human Rights in 2006, in part "to redress (the Commission's) shortcoming," which included granting membership to countries with poor human rights records. The resolution establishing the revamped UNHRC declares that member states "shall uphold the highest standards in the promotion and protection of human rights. But that's not happening," said Willy Fautre, director of HRWF.

Articles 18 and 19 of the Universal Declaration of Human Rights, which the U.N. General Assembly adopted in 1948, explicitly protect freedom of thought, conscience, religion, opinion and expression.

The U.N. General Assembly has the power to suspend the rights of UNHRC members that commit serious human rights violations. Libya became the first and only country to be suspended from the council in 2011 amid the Gaddafi regime's brutal suppression of protesters.

Download the reports by clicking here: 2013 Annual Report on Tibet and Special Report on Re-education Through Labor.