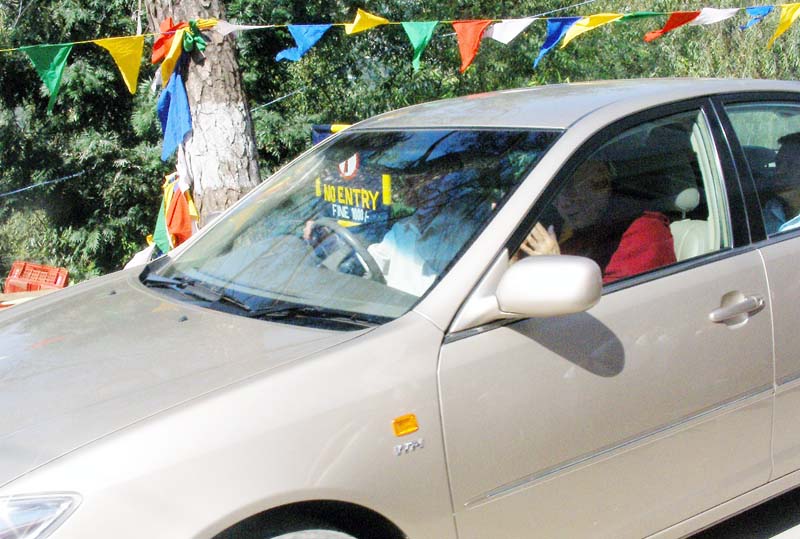 Hundreds of Tibetans and foreigners lined the streets of the Indian hill station of Mcleod Ganj, Lower-Upper Dharamsala, today 13 October 2009, in anticipation of His Holiness the Dalai Lama's return from his three-week visit to the US and Canada. His Holiness is scheduled to hold two sets of teachings at the Main Temple here before heading to Japan at the end of the month.

The crowd bowed and offered traditional white scarves as the vehicle carrying His Holiness passed through narrow streets decorated with prayer flags and banners with Tibetan slogans such as "Welcome Back" and "Congratulations on your successful trip." This ostentatious welcome is an integral Tibetan custom, a symbol of Tibetans' respect for and devotion to their spiritual and political leader.

According to His Holiness the Dalai Lama's official website, he will be teaching from 15 to 18 October on the Diamond Sutra, Geshe Chekewa's "Seven-Point Mind Training," and Tsongkhapa's "Three Principle Paths." On the last day of the conference, he will confer the Avalokiteshvara (Compassion Buddha) Initiation. These teachings are "at the request of Taiwanese devotees," but followers of all nationalities are welcome to attend. Around 1000 Taiwanese Buddhist followers are expected to attend the teachings.

From 20 to 22 October, His Holiness will lecture on the Four Noble Truths, as requested by a group of Southeast Asian devotees.

On 31 October, His Holiness is scheduled to commence a one-week tour of Japan with a public talk in Tokyo.

Anyone can register to attend the Dalai Lama's teachings at the Tibetan Branch Security office in Mcleod Ganj (near Hotel Tibet). The teachings can also be viewed via webcast at: http://www.dalailama.com/page.128.htm.