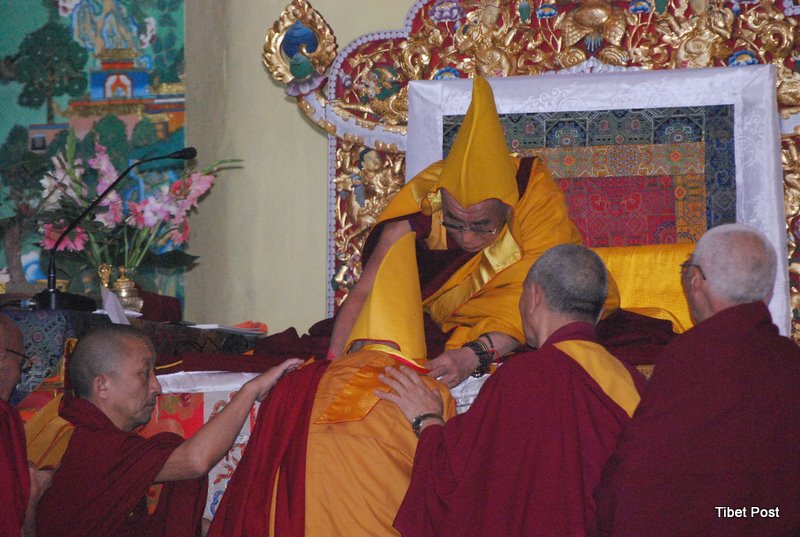 Dharamsala, India: Today, Monday 26 October, the Norbulingka Institute presented the most comprehensive biography to date of the 14th Dalai Lama, Tenzin Gyatso, in a public ceremony at the Institute. His Holiness the Dalai Lama; His Eminence the Karmapa, head of the Kyagyul sect; His Eminence Menri Trizin 33rd Lungtuk Tenpai Nyima, head of the indigenous Bon religion; the Tibetan Prime Minister Samdong Rinpoche, the Deputy Speaker Dolma Gyari, representatives from local NGOs, and many other Tibetans and foreigners attended this morning's celebration.

The ceremony opened with a public prayer, followed by the inauguration of Thupten Nyima as the 102nd Ganden Tripa, or head of the Gelupa School of Tibetan Buddhism.

Norbulingka's mentor and former director, former Tibetan PM Kesang Yeshe, presented a history of the institute's development and explained the purpose for publishing Norbulingka's 12-volume biography of His Holiness the 14th Dalai Lama.

The biographers began their work in 2000 and have finished the first six volumes, covering the Dalai Lama's birth through 1960, the year after his migration to India. The biography's 17 writers and editors received a blessing from His Holiness during the ceremony.

Prime Minister Samdong Rinpoche gave an address praising the accomplishments of Norbulingka, including its creative preservation of Tibetan art and culture, and its ability to sustain itself for the past 14 years without government funds.

He commended the Institute for offering stable employment and training to thousands of Tibetan refugees, in a time when many companies are hiring fewer people and requiring a higher rate of production per employee.

The Rinpoche also spoke on Norbulingka's role in preserving the Tibetan language by publishing this biography in Tibetan.

This is an important achievement, he stated, because the Tibetan language is currently threatened by the prevalence of other languages in today's society.

"The Tibetan language and culture are like a boat on a violent ocean, so if there is no clear orientation and direction, we may get lost," the Rinpoche proclaimed.

Deputy Speaker Dolma Gyari emphasized the biography's significance at this critical moment, when the official Chinese position is to denounce His Holiness and spread false and misleading information about him and the Tibetan cause. 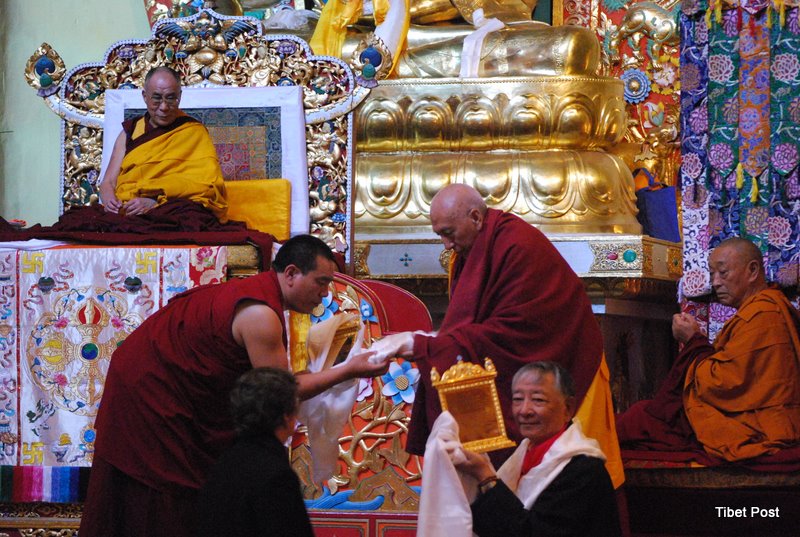 In the keynote speech, His Holiness congratulated the new Ganden Tripa on his inauguration, and commended the merit system by which monks can obtain this lead position. He also thanked Thupten Nyima for advocating the Tibet cause and religion, and requested that he continue this great work under his new title.

Tibet's spiritual leader acclaimed Norbulingka's meaningful and visible progress, stating that, "We in the Tibetan community tend to begin a project with enthusiasm, but slack off before long. The Norbulingka Institute, however, has demonstrated the opposite by carrying out and sustaining so many creative and progressive endeavors."

He humbly mentioned that his biography is insignificant compared to the major Buddhist texts and commentaries available today, but it is a story of a person who has dedicated his life to the principles of Buddhism and helped others in a minor way.

The ceremony concluded with a prayer, led by His Holiness, for the four Tibetans who were executed in Lhasa last week, the Uighurs killed in Xinjiang, and 600 victims of a recent bombing in Iraq.