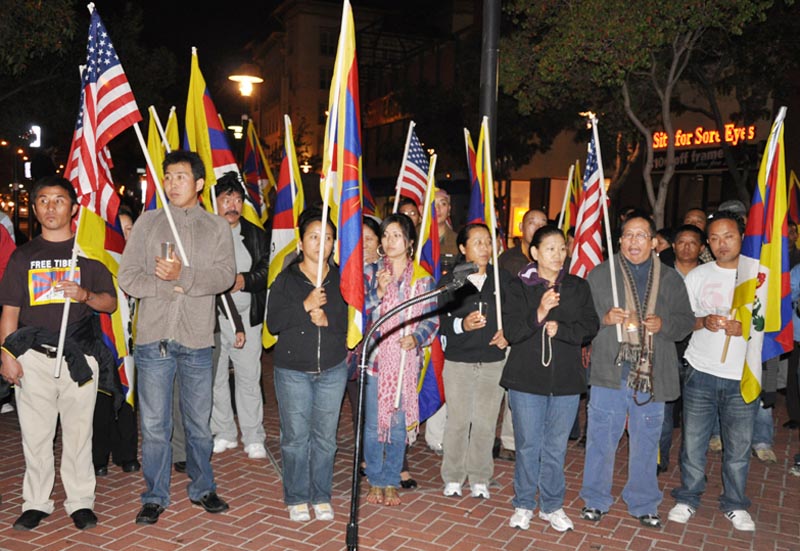 Berkeley, CA, USA: San Francisco Bay Area Tibetans gathered Saturday night, 24 October, for a candlelight vigil, after receiving the tragic report from the Tibetan Center for Human Rights in India that the Chinese government had executed four Tibetan activists on 20 October. The men were convicted for their alleged involvement in the March 2008 uprising in Lhasa, in a move activists are decrying as a violation of international human rights law.

Three of the young Tibetan men who were executed are: Lobsang Gyaltsen, age 27; Loyak, age 25; and Penkyi, age 21. A fourth unidentified Tibetan was also reportedly executed on the same day.

"These individuals were denied their basic legal rights, and their trials were not conducted in accordance with international judicial standards. Despite Chinese law providing that these cases should have been tried in open court, where independent observers could have attended, these four Tibetans have been prosecuted behind closed doors," announced Yangchen Lhamo, a board member of the organization Students for a Free Tibet.

These are the first known executions of Tibetans since 2003, and they signal an alarming escalation in the Chinese government's campaign to punish any Tibetan who dares to speak out against Chinese rule, according to SF TEAM TIBET.

"Everyone should get their phones and call their U.S. government representatives to demand an immediate response and denounce this travesty of justice, and ask for concrete actions on Tibet by President Obama during his upcoming visit to China," urged Tsering Dorjee, President of the San Francisco Regional Tibetan Youth Congress.

Wei Jingsheng, a well known Chinese Human Rights and Democracy activist and often referred to as "the leader for the opposition against the Chinese Communist dictatorship" was also present at this vigil and said he "supports the struggle of all people in China deserving of Human Rights".

Vasallo explained, "That will make a statement and get progress for human rights and democracy in China and Tibet."

"Yes, we can certainly make a difference if we all raise our voices in unison. As such, we must join in solidarity with those who cannot speak and continue to suffer under the repressive Chinese government," advised Kunchok Tashi, Vice President of the Tibetan Association of Northern California.

SF TEAM TIBET has scheduled another protest to take place outside the Chinese Consulate in San Francisco this Friday, 30 October, from 12pm-3pm.