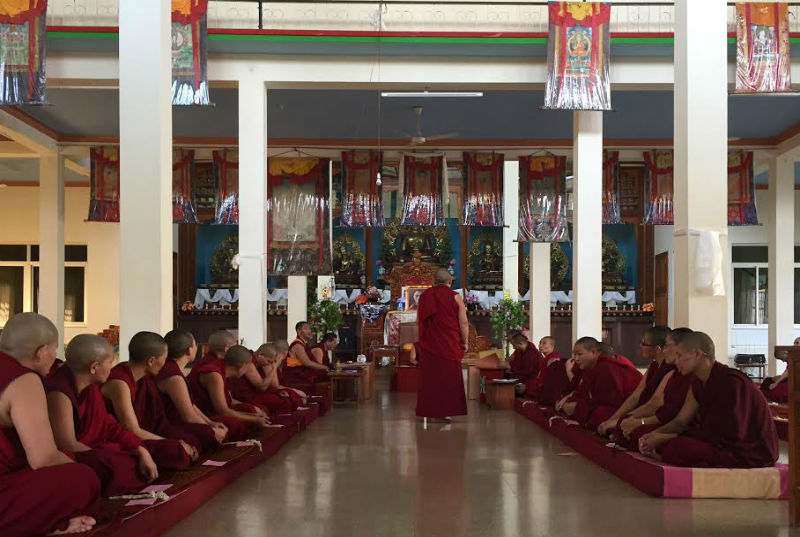 Mondgud — The third Geshema Examination has started today in Jangchub Choeling Nunnery, in Mundgod. It is scheduled to take place from May 1st until May 12th. These exams are being organized according to the special regulation passed in 2012 and carried out under the supervision of the Geshema Examination Board, which is comprised of representatives from Department of Religion and Culture of the Central Tibetan Administration, Tibetan Nuns Project, Institute of Buddhist Dialectics-Dharamshala and six concerned nunneries located in India and Nepal.

The examination includes debate and written test in major texts of Buddhist studies. The subjects are divided into main and optional. Tibetan Language, Tibetan History and Modern Science are optional subjects. It is not compulsory for the nuns to pass these optional subjects, however the marks obtained are added to the total marks.

In total, there are thirty-eight candidates taking part in the current examination, eleven in the first year, six in the second year and twenty-one in the third year. The duration of the Geshema examination is a total four years. After holding the fourth examination in Geden Choeling Nunnery, Dharamsala in 2016, nuns can begin receiving Geshema honor, fulfilling the longstanding aspiration of His Holiness the Dalai Lama and marking a new chapter in development of the nun community.