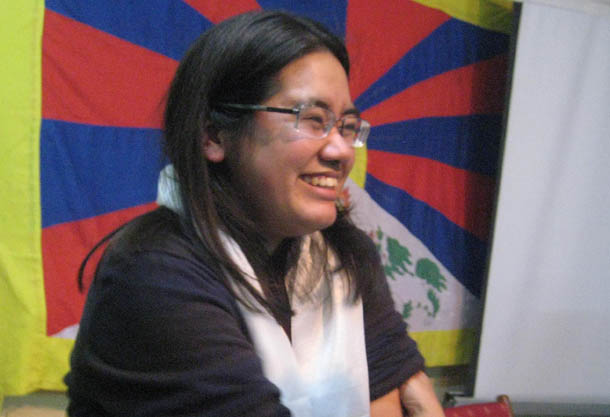 The Tibetan activist Dechen Penpa gave a photo presentation at Lhakpa Tsering Memory Hall of the Department of Information and International Relations, Tibetan government in exile in Dharamsala, India, on November 6, describing her experiences as a student and teacher in China.

Ms Dechen, who was born in London and later worked for International Tibet Support Network in Germany, moved to Beijing a few years ago. There, she studied Chinese and taught English at the National University.

During her talk, organised by Students for a Free Tibet and PEN, the Guild of Tibetan Writers, Ms Dechen described her feelings on arriving in China, her life in Beijing, and her trips to Tibet to research the culture and traditions of her ancestral homeland.

She contrasted living conditions in China and Tibet, and described the sense of compromise and regret felt by some elderly Tibetans who have worked as officials for the Chinese government.

Ms Dechen's talk also examined the feelings of young Tibetans in Tibet and China, and Chinese attitudes towards Tibet.

Last year, before the Olympic Games, the Chinese authorities deported Ms Dechen to London, on suspicion of membership of the Tibetan Youth Congress. She explained how she has gone on to promote the work of imprisoned Tibetan film-maker Dhondhup Wangchen and the Tibetan woman writer Woeser.

The event concluded with a question-and-answer session, with the participation of members of the Tibetan Parliament-in-exile and the general public.