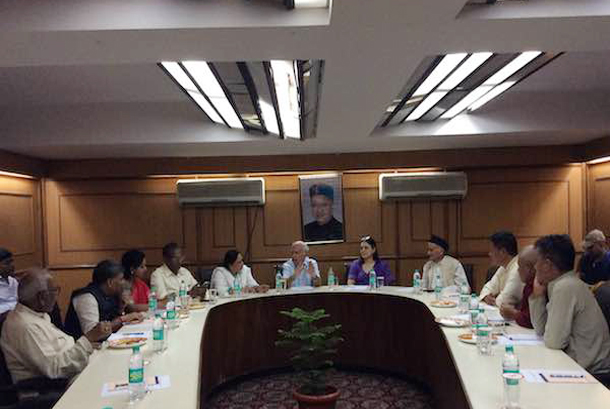 Dharamshala — All Party Indian Parliamentary Forum for Tibet (APIPFT) including Convenors and Co-convenors of Indian parliamentarian group in support of Tibet issue met Wednesday evening to discuss the Tibet issue at the Himachal Bhavan in New Delhi.

"Indian parliamentarians from six different political party took part in the meeting and said China tries to annihilate the identity of Tibetan people." a report by India-Tibet Co-ordination Office said on August 12.

The convener of APIPFT Shri Shanta Kumar welcomed the members and as per the program asked Speaker Penpa Tsering to brief the members on the current issue of Tibet.

"Mr Tsering briefly mentioned the Chinese policies being practiced in Tibet aimed at destroying the identity of the Tibetan people," the report said.

According to the report, "the parliamentarians expressed their concern of human rights violations of the Tibetan people even in the 21st century."

The Indian parliamentarians also criticised the Chinese government's policy on Tibet, saying "the demographic aggression by China to annihilate the identity of Tibetan people."

"They further affirmed that the commitment of the forum to carry forward the issue of Tibet in times to come."