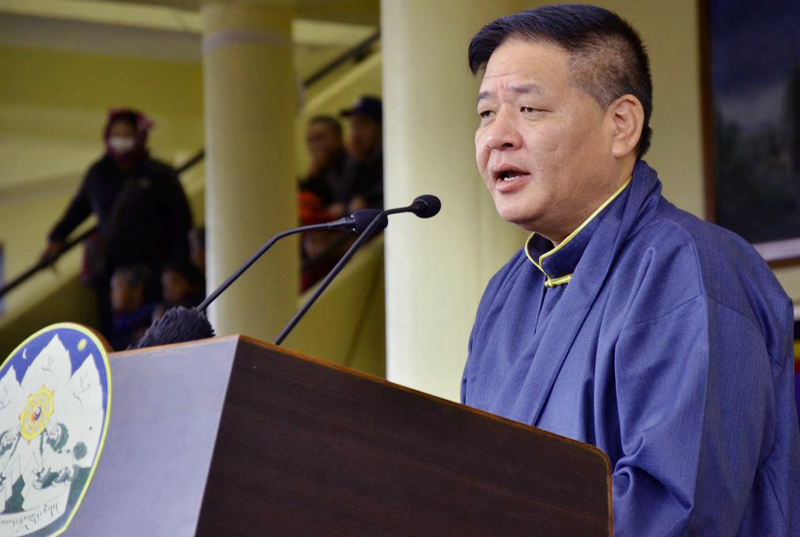 Tibetans in exile across the world celebrated the 26th Anniversary of the spiritual leader of Tibet, His Holiness the Dalai Lama's Nobel Peace Prize Day, and marked the 67th Human Rights Day. Thousands of Tibetans and supporters assembled in the main temple in Dharamshala to mark the anniversary. The day is observed across the world under the theme of "Our Rights. Our Freedoms. Always" to mark the anniversary of the presentation of the Universal Declaration of Human Rights.

In his statement to mark the occasion, the Speaker of the Tibetan Parliament in-Exile, Mr Penpa Tsering denounced China for its lack of respect for human rights and the rule of law in Tibet. "In Tibet there is no end even to this day to the endless campaigns by such means as self-immolations by the Tibetan people, indicating in unmistakable terms the total absence of respect for human rights there."

"In addition to the extremely poor human rights situation, restrictions on the Tibetan people keep on being tightened without any limit. For example, the Chinese government of Kham Driru Dzong has implemented various kinds of numerous controls and restrictions on the local Tibetans' religious freedom," Mr Tsering said.

With great concern over the urgency of the situation, specially in Driru County of eastern Tibet, he said "the monasteries have been placed under controls and restrictions in all aspects of their functioning; monks and nuns have been expelled from their religious institutions, and bans and restrictions have been placed on the local lay-people's practice of their religious faith. The monasteries have been turned into semblances of Chinese government offices while monks and nuns have been forced to act like members of the Communist Party of China."

Citing the recent reports on Tibet, the Speaker said the situation, "appealed to the international media and human rights organizations to pay attention and put pressure on the government of China to end the repressive practices."

Mr Tsering said that "the measures were designed to fundamentally destroy the traditional identity of the Tibetan people as well as their religion and culture with the sole aim to transform Tibet into a colony of China. Likewise, the campaign of investigating corruption in Tibet was ordered was to be used as a means to resolutely crackdown on officials and party members who follow the Dalai Lama."

"Thus party and government officials showing religious faith in His Holiness the Dalai Lama, people believing in religion, those receiving religious teachings from His Holiness the Dalai Lama, and those who had sent their children to study in schools run by the "dalai clique" have been ordered to be placed under investigation," he stated, adding: "In the case of the situation in a place like Driru Dzong, the enormity of the tragedy resembles the period of the Great Cultural Revolution which had wrecked China in the past."

Speaking on the current situation in the Ngaba region of Tibet, the Speaker said "China very recently tried and jailed two Tibetan Buddhist monks for over three years. Other Tibetans continue to be arrested. Besides, even today, countless numbers of innocent Tibetans, including especially the young Panchen Rinpoche reincarnation, continue to remain disappeared after they were taken away or jailed. And under the violent repression of the Chinese government, they continue to endure untold suffering, including beating and torture."

"We therefore also take this opportunity to make a strong appeal to the international human rights organizations and others to bring urgent pressure on the government of China to release these innocent Tibetans forthwith and also to put an immediate end to its unrestrained atrocities on the Tibetan people which are not only inhuman but in gross violation of all norms of international law," the statement said.

"With a view that the aspiration of the Tibetan people in Tibet who with indomitable courage and a selfless sense of brotherhood towards fellow-Tibetans continue to protest against the government of China, as well as with the hope that their immediate suffering may be seen come to an end," he added saying, "the Tibetan Parliament in Exile has continued to carry out a series of campaign action."

"These have included carrying out various kinds of appeal actions directed at governments across the world, parliaments, prominent public figures, the news media, and the general public; and our campaigns continue without end," Mr Tsering said.

The Tibetan Parliament in-Exile has expressed its deep gratitude to all those in the international community who have given us support and emphatically urge them for continued support in future too. He further stated, "From the international community too there has been continuing support with showing of understanding, active displays of concern, and showing of sympathy and solidarity."

Just recently, a delegation of members from the United States House of Representatives led by former House Speaker Ms Nancy Pelso – who is also the current House Democratic and Minority leader – was able to visit China and Tibet and we offer them our congratulations. The members of the delegation discussed the issue of Tibet with the Chinese leaders both in Tibet and in Beijing.

"Mr Christoph Straesser, the Human Rights Commissioner of the German government, visited China and parts of Tibet to investigate the human rights situation there and also discussed the issue of Tibet with Chinese leaders. We offer our thanks to him too. We remain hopeful that in future too, delegations like these from other countries as well as journalists will also make efforts to undertake visits to Tibet."

"We also call on the government of China to allow delegations, journalists, and others from other countries to undertake their visits without any orchestration or stage-management of events or concealment of the real situation in Tibet," he further stated, saying "the issue of Tibet is such that there is no other way to ensure its resolution but only by undergoing the trials and tribulations of exposing oneself to the fires – and risking the burns – of dealing with the Chinese government."

It was for this reason that since 1974 His Holiness the Dalai Lama held a series of discussions with the top officials of the Central Tibetan Administration (CTA) on the subject of his proposal for a Middle Way Approach to dealing with the Government of China.

Explaining the Middle Way Approach (MWA) is the fundamental policy of the CTA, Mr Tsering said: And in keeping with the opinions of the general Tibetan public, he explained his proposal in his speeches before the US Congressional Human Rights Caucus and the European Parliament at Strasbourg.

The opinions of the general Tibetan public were again sought thereafter and more than 64 percent of the Tibetan people expressed their support for the proposal. Hence, it was with the highest standard of democratic support that the MWA was adopted by the Tibetan Parliament in Exile in keeping with the democratic process.

However, there are still a fair number of those who, failing to give in-depth consideration to the imperatives underlying the adoption of the MWA, give all sorts of interpretations to this policy, the Speaker said, adding: "The reality is that the Tibetan people are today faced with a dire situation marked by crippling hardship, with the dangers being obvious that it will not be long before the identity of Tibet and the Tibetan people, their precious culture and religious traditions, and their noble traditions and customs could disappear. "

"From the side of the leadership of the Chinese government too, there should be an actual implementation of the approach of seeking truth from facts, which is something they talk about all the time, instead of adhering stubbornly to their currently rigid hard-line policy. His Holiness the Dalai Lama has offered a MWA which does not seek "victory for oneself and defeat for the other side" but is mutually beneficial to both the Chinese and Tibetan sides and which is, in particular, fully within the framework of the Constitution of the People's Republic of China.

The MWA therefore offers a basis for a solution to the problems on both the Chinese and Tibetan sides. It will enable China to see the fulfillment of its desire that Tibet should not secede from it. The desire of the Tibetan people not to see their traditional identity, religious traditions, culture, and environment disappearing or destroyed will also be fulfilled. We therefore reiterate our appeal to the leaders of China to pick up the requisite amount of substantive courage to realize in a timely manner the imperative to work for the fulfillment of these aspirations."

Speaking on the International Himalayan Festival, organised by the local host community to honour His Holiness the Dalai Lama for his noble deeds, Mr Tsering said that this occasion is also symbolizing "the bond of unassailable friendship between the Tibetan people and the local Indian people."

"These are highly laudable objectives," he continued, expressing his thanks to all participants and organisers of the festival. The gratitude we owe for the friendship and help the government and people of India both in the centre and the state could never be forgotten," he said, while reiterating with his appeal to everyone to continue to jointly contribute towards strengthening the existing fraternity between the two communities.