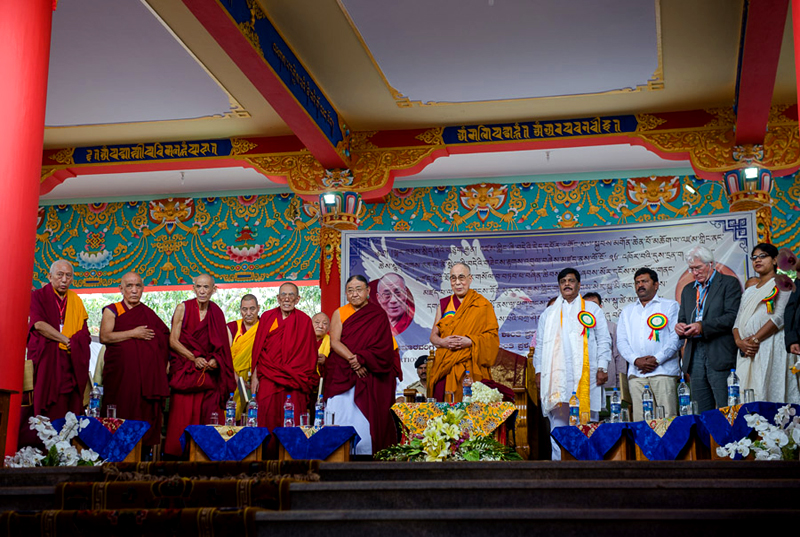 Dharamshala — The Tibetan language is the medium that most accurately expresses this knowledge of the mind and Buddhist philosophy,' His Holiness the Dalai Lama said, during a special event to commemorate the confluence of the 26th anniversary of the conferment of the Nobel Peace Prize on him and the International Human Rights Day.

Dr H C Mahadevappa, the PWD minister in the state government of Karnataka and Mr H P Manjunath, MLA from Hunsur, joined His Holiness the Dalai Lama at the celebration to mark 26th anniversary of the conferment of Nobel Peace Prize on His Holiness. The Gyudmed monastery in coordination with the Tibetan settlement office of Hunsur organized the celebration.

As the ceremony began, Representatives of the Tibetan community presented His Holiness with a golden butter lamp for daily use at his residence as a mark of gratitude for his leadership. Khen Rinpoche, the abbot of Gyudmed monastery, read the accompanying eulogy.

The staff and students of Snowland academy also offered an image of Buddha Amitayus, the Buddha of Limitless Life to His Holiness the Dalai Lama.

Addressing the ceremony, His Holiness the Dalai Lama said: "My greetings and respects to the representatives of the Karnataka Government, friends from across the world and members of the Hunsur Rabgyeling Settlement. Today's event has coincided well with these teachings here at Gyumey. I would particularly like to thank the students for their fine performance and especially the elderly lady who trained them."

"I would like to thank Dr Mahadevappa and Mr Manjunath for the kindness the Karnataka Government and people have shown to the Tibetans. Karnataka used to be known as Mysore State, with its capital at Mysore. I came here in 1956 when Mr Nijalingappa, 'the maker of Karnataka' was Chief Minister."

"He had a special concern for Tibetans. After 1959, when we came back to India as refugees, Prime Minister Nehru wrote to the state governments asking if any of them could provide land on which to settle Tibetans. Karnataka offered the most and there are 30,000 Tibetans living here now."

"Major monasteries have been re-established here keeping up the Nalanda tradition of memorising root texts and commentaries, then studying and debating them. On the basis of this we uphold the Mahayana and Vajrayana vehicles too. This comprehensive practice of Buddhism is something precious to the world, because the knowledge of the mind and emotions it represents is something everyone can benefit from."

"When we came to India as refugees the government and people of India offered us immense support. Here in Karnataka, Chief Ministers who came after Nijalingappa were kind to us too. I'd like to express our deep thanks."

"Being awarded the Nobel Peace Prize was an honour, but I still remained a simple Buddhist monk committed to peace and non-violence. Over the last 30 years I've also engaged in dialogue with modern scientists. "

"As a result I've learned a lot about the external world and they've learned about the mind, consciousness and emotions. The Tibetan language is the medium that most accurately expresses this knowledge of the mind and Buddhist philosophy."

Dr H C Mahadevappa gave a long account in English of His Holiness's life and achievements. Hunsur MLA, H P Manjunath followed this with an address in Kannada, which essentially sought His Holiness's blessings that the whole land of India may be at peace.