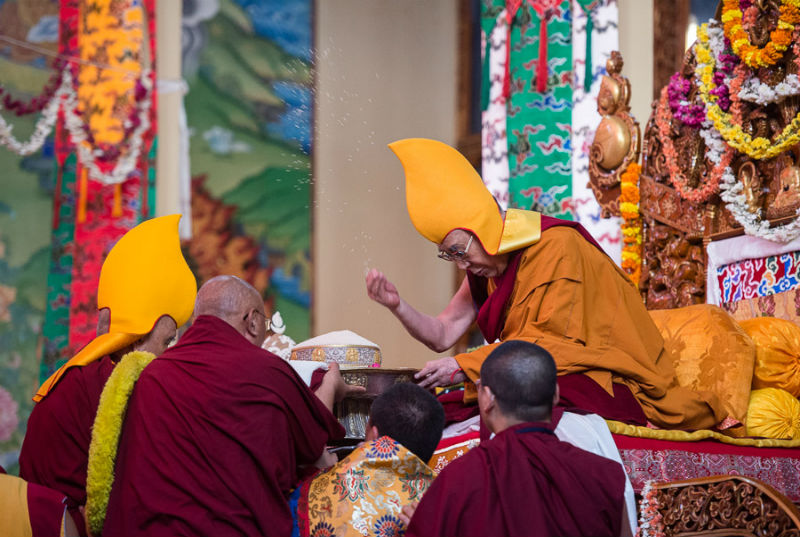 Bylakuppe - The spiritual leader of Tibet His Holiness the Dalai Lama was offered a long-life offering (Tenshug) at Sera Monastery in Bylakuppe, South India, on December 18, 2015.

The Long Life Offering was conducted according to Sutrayana prayers, the Prayer to the Sixteen Arhats, Long Life Prayers to Amitayus, and dedication from the Samantabhadra prayer.

When the prayers were over, His Holiness announced that the Abbots of Sera Mey and Sera Jey Monasteries had requested him to give a teaching, which he had agreed to do.

"We are at a crucial juncture in our history," he said, "but the spirit and courage of the people in Tibet is unwavering. Most of the monks who first came into exile initially stayed at Missamari. Some of them went to build roads in Chamba, where they had to wear lay clothes. Eventually we moved down here to create settlements, which meant cutting and burning trees and clearing the land. Once the settlements had been established, monks from Buxa and elsewhere were shifted here too. Many of them had faced much hardship by the time they reached here.

"Today, I'm going to Tashi Lhunpo, where I will inaugurate their new prayer hall and I'll complete the transmission of the Collected Stages of the Path Texts that I started two years ago. It's important to keep our spiritual bonds. How do we do that? By studying and putting the teachings into practice. This is the only way to preserve them. We study the Three baskets and engage in the Three Trainings, When we say in our prayers, 'May the Dharma flourish', we should mean 'May it flourish in me'.

"So far we've preserved the Dharma well, but we need to be alert to any faults that may have crept in. I'd like to ask the senior Lamas and officials, including the Ganden Tri Rinpoche to get together and discuss what improvements we may need to make.

"Now I'm going to read 'Destiny Fulfilled', in which Je Tsongkhapa describes how he studied, practised and dedicated the resultant merit. This included memorizing the text, receiving a word by word explanation and exercising what he'd understood on the debate yard. This was the approach of the masters and students of Nalanda. The more they learned the more their minds were subdued. Je Rinpoche says don't be studious with only a rough understanding. Bodhisattvas enter into the path in order to be of service to others. In India there were the writings of many different masters. In Tibet we have several different traditions. We should make ourselves familiar with them.

"A long time ago there was a very good monk from Kinnaur who came to request a teaching from me that I couldn't give him because I hadn't received it. I told him to approach Khunu Lama Rinpoche. I was sorry that I had been unable to fulfil his wish. The Perfection of Wisdom Sutra in 25,000 Lines says Bodhisattvas should be familiar with all the teachings in order to be able to give them to others. Around the same time I received Khunu Lama Rinpoche's 'Praise of Bodhichitta' from him, as well as 'Guide to the Bodhisattva's Way of Life', I also wanted to receive Guhyagarbha from him. As was my custom I asked my Abbot, Ling Rinpoche about it and he suggested that I be cautious, apprehensive about what Dolgyal might do. So, finding that my religious freedom was restricted, I missed the opportunity.

"Later, I performed a dough ball divination before the Jowo Wati Sangpo statue that indicated that I should receive the teaching. Ling Rinpoche said since you are the Dalai Lama, here to serve the Tibetan people, no one should criticise what you choose to do. And from that time on I gained religious freedom. Propitiating Dolgyal is to just pray to a mundane spirit. There is a risk of it detracting from the practice of the Dharma."

His Holiness said he was going to read from 'Destiny Fulfilled' which, as an account of Je Rinpoche's training and education, shows how he conducted his life. This is exemplified by the fourth verse:

In the beginning, I sought much learning. In the middle, all teachings dawned on me as spiritual exhortation. In the end, I practised day and night. I dedicated all this virtue for the dharma to flourish. Thinking this over, how well my destiny is fulfilled! Thank you very much, Noble Lord Wisdom Treasure!

At the end His Holiness said: "Now I'm in my 81st year. We've set up these settlements and secured the preservation of the Dharma, however, at some point senior people like the Ganden Tri Rinpoche and me will be gone, but when that happens there will be younger Lamas like Ling Rinpoche to rely on."

When the prayers and teachings were complete, Geshe Lobsang Monlam came up to the throne and His Holiness released a new Tibetan dictionary he has produced. He was effusive in his praise:

"I'd like to thank you for this unprecedented project. You have achieved this without the benefit of modern education. I rejoice in your effort, it will further the development of the Tibetan Language and benefit the Tibetan people."

After lunch, as His Holiness set out to drive the short distance to Tashi Lhunpo, the streets around Sera Monastery were lined with people waiting to see him off. The road was newly surfaced all the way to the new temple. On arrival, as he climbed out of his car, His Holiness stopped to watch the Tashi Shölpa dancers who were singing and dancing to welcome him. He walked gradually up to the temple door, greeting and teasing old friends on the way. He cut the ribbon, pushed open the doors and recited prayers to initiate the inauguration. Up at the altar he paid his respects before the brightly gilded statues and lit the lamp. Visiting the Gönkhang he saluted Dökham Dagmo.

His Holiness sat on a throne as tea and sweet rice were served and a praise to Gendun Drup, the First Dalai Lama, was recited. He said that Je Rinpoche had predicted that Gendun Drup, who studied with him, would do great things. One of his achievements was the founding of Tashi Lhunpo, which, he said, was named by Dökham Dagmo, an aspect of Palden Lhamo. These recollections brought tears to His Holiness's eyes and he remarked that just as he feels a strong karmic link to Dromtönpa, he also has a deep fondness for Tashi Lhunpo Monastery.