Details
Students for a Free Tibet 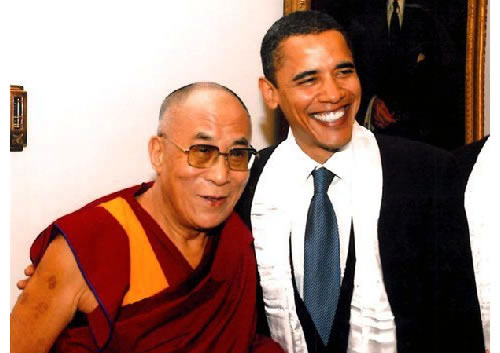 New York: In response to US President Barack Obama's brief reference to Tibet during his visit to Beijing this week, Students for a Free Tibet is calling on the Obama administration and other democratically elected governments to move beyond verbal statements of support, to press China for real change inside Tibet. By calling for the resumption of dialogue between the Chinese government and His Holiness the Dalai Lama's representatives, President Obama indicated that the issue remains a concern for the US government. However, his statement, which also recognized Tibet as a part of the People's Republic of China, failed to address the reality of the Chinese government's ongoing violent repression of the Tibetan people.

Tenzin Dorjee, Executive Director of Students for a Free Tibet, stated that, "President Obama's remarks on Tibet failed to embody the messages of hope and change that Americans elected him on. The Tibetan people need more than the same old statements from governments; they need America to lead with concrete actions that will actually pressure China to sit down at the negotiating table."

Dorjee continued, "In March 2008, Tibetans rose up in a clear rejection of Chinese rule, showing once again that they do not see themselves as part of China, but as citizens of a formerly independent nation. It is well past time for leaders of the world's democracies to stand up for the Tibetan people's right to freedom."

In the lead up to President Obama's visit to China, Tibetans and people of conscience across the United States and around the world sent thousands of letters to the White House calling for concrete action on Tibet. President Obama's decision not to meet with the Dalai Lama last month drew widespread criticism and was viewed by Tibet activists as a dangerous concession - one that has brought no visible benefit to the United States' foreign policy, economic, or climate goals with regards to China.

According to Kate Woznow, Deputy Director of Students for a Free Tibet, "The Obama administration is pursuing a flawed strategy of appeasement with the Chinese government, which will only embolden Chinese leaders to crack down harder on Tibet and issues of human rights."

Woznow concluded that, "Democratically elected governments must not shy away from pressing China's leaders to peacefully negotiate a just and lasting resolution for the Tibetan people."

President Obama's China visit occurred shortly after His Holiness the Dalai Lama's highly publicized visit to the disputed Indian border region of Arunachal Pradesh. In what may be a litmus test of China's approach to international disputes, Beijing officials vehemently opposed the visit, claiming the Himalayan state as a part of China based on the region's historical ties to Tibet. Tensions along the Indo-Chinese border are expected to continue as long as the Tibet issue remains unresolved.