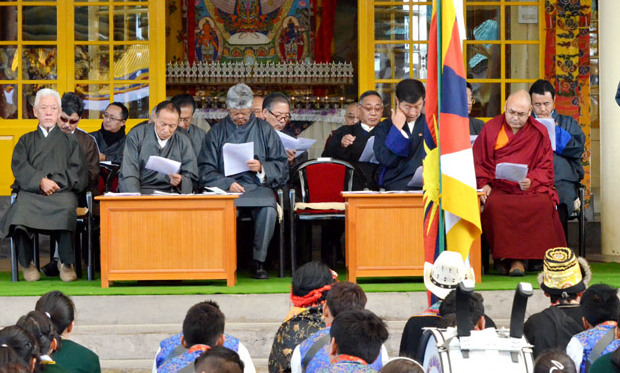 Dharamshala — In accordance with the 57th Tibetan Uprising Day celebrated Thursday, March 10th, the Tibetan Parliament in Exile led by speaker Penpa Tsering released a statement commemorating the occasion, calling on Tibetans everywhere to remember those lost in the freedom struggle.

The statement went on to recall the annexation and occupation of Tibet, calling the superpower "nothing but a perpetrator of violent and imperial dominion over many of its neighboring countries and territories, including Tibet."

Noting the significance of the date March 10th, the Speaker explained that after the Chinese directly threatened the life of His Holiness the Dalai Lama, "there was a spontaneous, united uprising against communist China by people from all The Three Provinces in Tibet's capital Lhasa on 10th March 1959. The memory and effects of this great uprising can never go into eclipse from the vast firmament of this globe. This campaign movement against the government of China also remains a historic event of such importance that it will never be forgotten by our future generations for as long as this eon endures."

"Generations of the people of the Snowland of Tibet have been relentless in protesting against the policies being implemented by the government of China also because of the ways and means by which China has acted against them with coercion and force. During the entire period of its occupation rule, China has continued to trample on the human rights of the Tibetan people, denied them their religious freedom, disregarded the need to protect their linguistic heritage, set out to destroy their natural environment, and implemented a vicious policy of colonial domination... China threatens to transform the historically Tibetan territory into one controlled and dominated by Chinese people. And this has now reached a stage whereby China is poised to decimate the integrity of the Tibetan nation and people out of existence."

Including how those in exile have continued the struggle for freedom in Tibet, the Speaker included the most recent incident of 16 year old Dorjee Tsering, who on February 29th self-immolated for the fundamental cause of Tibet. "Incidents like these show that Tibetans in Tibet and in exile are of one mind in their aspiration. Besides, they show on a persistent basis that Tibetans will never give up their struggle so long as there is no final settlement of their just cause."

The statement commemorated the young people in Tibet who continue, despite violent backlash from police, to protest the occupation of Tibet by carrying portraits of His Holiness the Dalai Lama and calling for his return to Tibet, and reminded Tibetans at large to avoid getting caught in differences between political party or sect, but rather remember the larger cause, stating, "it is of fundamental importance that Tibetans in Tibet and in exile steer a common cause and be clear about knowing who our enemies are and who our fraternal compatriots are... for it is a duty fallen on our shoulders to take up and further the hopes and demands raised by our fellow-Tibetans."

The Speaker closed by imploring Tibetans and foreign supporters alike to act in solidarity with those in Tibet, and call on foreign governments and organizations to peacefully resolve the critical situation inside Tibet. "On our part the Central Tibetan Administration remains committed to striving to reach a peaceful settlement with China on the basis of the mutually beneficial middle way approach... In this connection we would like to point out to the government of China that it should know that this is the timely, appropriate thing to do and will only be in keeping with the requirements of the time."