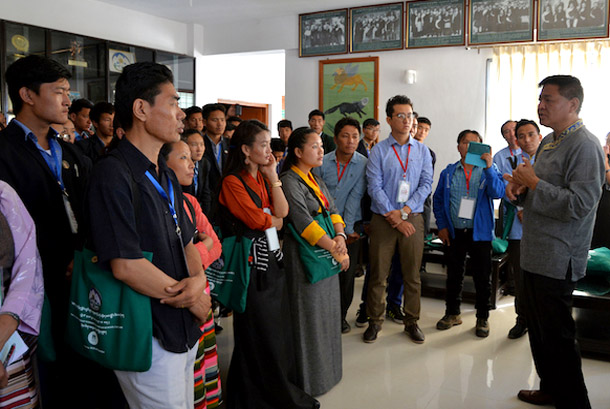 Dharamshala — "Tibet's ecosystem are undergoing major transformations due to climate change and failed policies of Chinese government," the Speaker of Tibetan Parliament-in-Exile said during a meeting with a delegation of school captains from 19 Tibetan schools based in India and Nepal.

Mr Penpa Tsering met with a delegation of school captains Thursday at the Tibetan Parliamentary secretariat. He highlighted the milestones in the evolution of Tibetan democracy in exile.

Highlighting the critical situation inside Tibet, Speaker explained the environmental destruction in Tibet as the most urgent issue facing the world.

He said that "Tibet's ecosystem are undergoing major transformations due to climate change and failed policies of Chinese government–including receding glaciers, shrinking and disappearance of thousands of lakes, drying of wetlands, thawing of permafrost, and reduced flow regimes in many rivers."

"Tibetan democratic polity under the supervision of His Holiness the Dalai Lama has undergone several major transitions; establishment of CTA in Mussoorie in 1959 which later shifted to Dharamshala in 1960, establishment of Tibetan Parliament in 1960, the framing of the Constitution for future Tibet in 1963, the adoption of the Charter for Tibetans in exile in 1991 and the direct election of Kalon Tripa in 2001 thereby announcing his semi-retirement from political role, and then eventually the complete devolution of His Holiness' political authority to the democratically elected leadership in March 2011."

He also spoke about the functions of the Tibetan government, annual meetings, topics of interest, and the democratic system of electing the representatives to parliament.