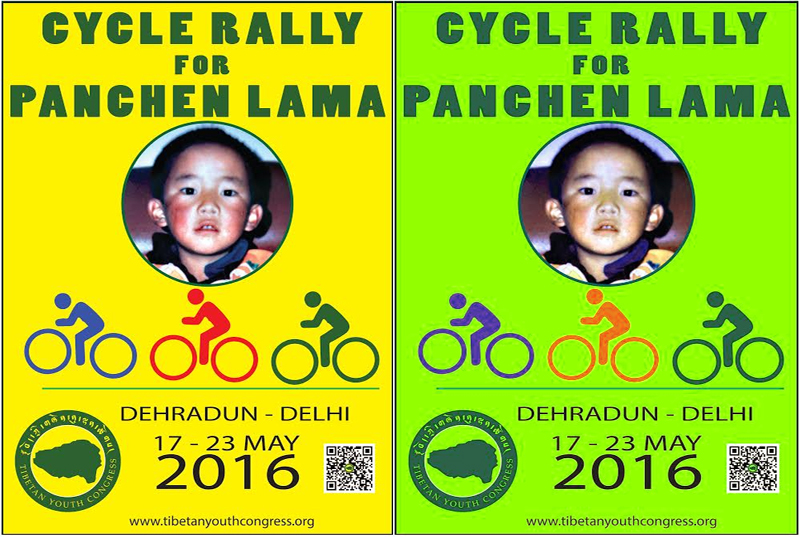 Dharamshala — A bicycle rally that aims to highlight the critical situation in Tibet and to bring awareness about 11th Panchen Lama, will be organised by Tibetan Youth Congress (TYC).

"The cycle rally will begin from Dehradun on May 17, which is the day when Panchen Lama was arrested and end in Delhi on May 23, 2016," TYC said in a statement, issued on Monday.

"TYC is organizing a 'Cycle Rally for Panchen Lama' to raise awareness about his situation, the condition of Tibetans living under the hard-line policies of the Chinese government and show our solidarity to our brothers and sisters inside Tibet," the TYC said.

"We seek accurate information about Gedhun Choekyi Nyima's whereabouts and well-being and we urge the United Nations as well as governments of the world to pressure the Chinese government to show us concrete evidence that Panchen Lama is indeed alive and well," they added.

On May 23rd, 1951 the "17-Point Agreement" was signed between Tibet and China under Chinese pressure. "Ending the rally on May 23rd will highlight the facts about the 17 point agreement and our position which is we do not accept the agreement as it was signed under duress", says TYC VP Tamdin Hrichoe.

In 1995 His Holiness the Dalai Lama recognized a young boy, Gedhun Choekyi Nyima, as the 11th Panchen Lama; the second most important spiritual leader in Tibet. Chinese authorities abducted Gedhun Choekyi Nyima and his family just weeks after; he was six-years old.

Gedhun Choekyi Nyima, the 11th Panchen Lama, and his family have been missing since 1995. The last time we had any information about his whereabouts was in 2010 when Chinese-appointed Tibet Governor, Padma Choling, told reporters that Gedhun Choekyi Nyima and his family are now living a good life as ordinary citizens in Tibet. China seeks to legitimize its rule in Tibet by claiming it plays a crucial role in the identification of Tibet's two most important spiritual leaders, the Dalai Lama and in this case the Panchen Lama.

After repeated attempts to gain access to the boy, no international agencies or human rights organizations (including the United Nations) have been allowed to visit Gedun Choekyi Nyima or his family, and their condition remains uncertain. In an attempt to establish their authority over all "internal affairs" of China (political or otherwise) the Chinese leadership nominated and selected their own 11th Panchen Lama in November 1995. Their selection of six-year-old boy named Gyaltsen Norbu, is another young victim in China's plan to undermine and control the Tibetan people, their faith, religion, and their nation.

Founded in 1970, TYC is the largest Tibetan non-governmental organization of Tibetan exiles, mostly young Tibetans with hopes of Tibetan independence.  TYC says it currently has 88 regional chapters and a total membership of 35,000.