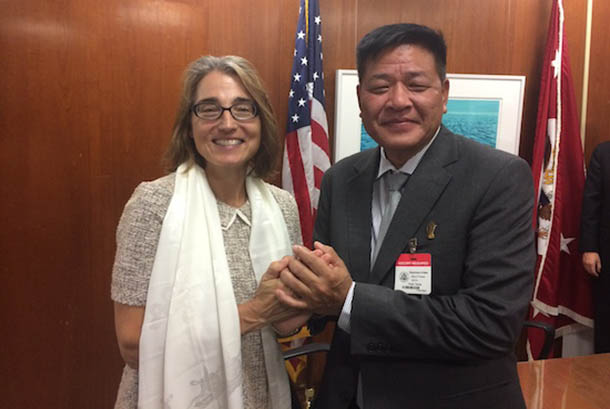 Washington DC — The new Representative for the Office of Tibet met with Under Secretary of the State for Civilian Security, Democracy, and Human Rights and the Special Coordinator for Tibet and discussed the current situation inside Tibet.

Representative of His Holiness the Dalai Lama Tsering was warmly received by Under Secretary Dr Sarah Sewall at the US State Department building on October 21, 2016, according to the Office of Tibet, Washington DC. The report also stated that "they discussed ways to strategically strengthen Tibet movement in coming days."

'During the meeting, they shared their views on current Tibet issues pertaining to the Sino-Tibet negotiation status, CTA's policies and programs relating to the gender issues, different approaches to reach out to the United States and its continued support for Tibet, especially during and after the US election,' it said.

He expressed his gratitude to Sewall and US government for their long-standing support for Tibet, expressing his hope to work closely with the State Department and gather their continued support.

Tsering who was recently appointed as the new OOT Representative for Washington DC, by Sikyong Dr Lobsang Sangay, the democratically elected leader of the Tibetan people. At his acceptance press conference, he thanked the "Kashag for the opportunity given to me to serve as a Representative of one of the largest Tibetan communities in exile." "I accept the Kashag's appointment with dedication and strong belief in the power of united efforts."

As a US Special Coordinator for Tibetan Issues, Dr Sewall visited Dharamshala in January, and met with His Holiness the Dalai Lama and the elected Tibetan leadership, to discuss issues of importance to the Tibetan community.

Dr Sewall, in her remarks at Lockdown in Tibet panel at UN in Geneva, in June, 2015 said, "Tibetans have an inalienable right to be stewards of their unique cultural, religious and linguistic heritage' and urged members of the UN Human Rights Council "to join the United States in encouraging the Chinese government to live up to its international obligations to respect Tibetans' distinct culture, identity, and fundamental human rights, as well as respect international protocols on diplomatic relations and reciprocal access among states."