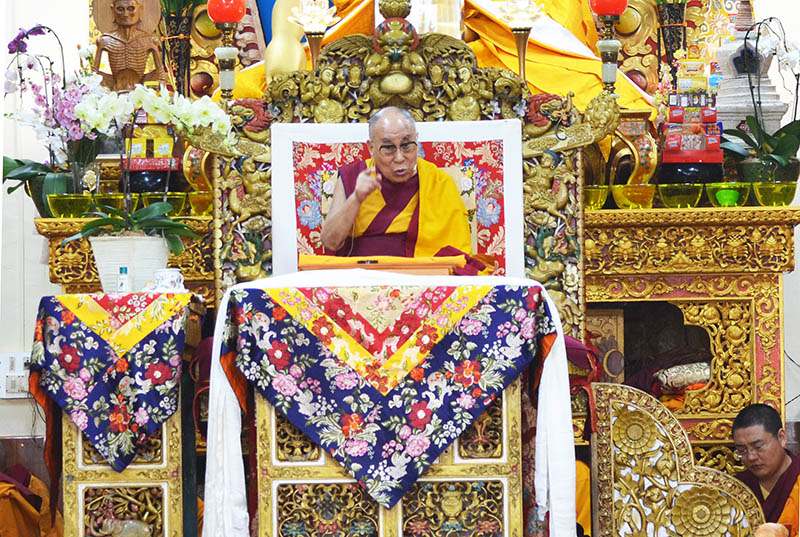 Dharamshala — His Holiness the Dalai Lama met over 1000 pilgrims from Tibet on November 30th, telling them that since they had come to India on pilgrimage or to visit relatives, he thought he would talk to them about Buddhism before they returned home.

Addressing the crowd of traditionally dressed Tibetans at the main temple in Mcleod Ganj, he said, “Buddhism spread the length and breadth of Tibet, but not that many people really understand what Buddhism is about. Our tradition comes from Nalanda, which was a great Indian centre of learning. The scholars there could analyse and explain Buddhist philosophy extensively using logic and reason.

“In Thailand, Burma, Sri Lanka and so on they follow the Pali tradition. They purely maintain the monastic discipline of the Vinaya. They teach the Four Noble Truths with their 16 characteristics and the 37 Wings of Enlightenment as we do. But they tell me that in their explanations they rely on the authority of scripture, rather than the fruit of reason.

“The Perfection of Wisdom teachings reached China as part of the Nalanda tradition, so the Chinese, along with the Koreans, Japanese and Vietnamese, recite the ‘Heart Sutra’ and read Nagarjuna’s ‘Fundamental Wisdom’. But the majority of Dignaga’s and Dharmakirti’s works on logic and epistemology were not translated into Chinese, so they don’t have a tradition of logical analysis. This is why, today, the Nalanda tradition is fully maintained only by Tibetans.”

His Holiness mentioned that at one time Chinese communist propaganda suggested that Tibetans had only blind faith in the Buddha’s teachings and it would wither when they gained a more scientific understanding. What has in fact happened is that scientists have become increasingly interested in a Buddhist approach, particularly concerning the workings of the mind and emotions. He mentioned that he has encouraged a reassessment of the contents of the Kangyur and Tengyur under three categories: science, philosophy and religion. Books have been published in Tibetan, translations of which are being prepared, presenting Buddhist science and Buddhist philosophy.

“Among 1.3 billion Chinese, 400 million are Buddhists. We can serve them by making our Buddhist traditions available to them. I believe we have kept our traditions alive not merely for our own benefit, but for the good of the world.

“The Buddha advised us to know suffering, overcome its causes, and achieve cessation by cultivating the path. We should know that it is our untamed minds that cause suffering. Our minds are disturbed and undisciplined because of our disturbing emotions—while the actual nature of the mind is clarity and awareness.”

“Once you see that ignorance is overcome by coming to understand reality, you’ll also see that it is feasible to achieve cessation. And when you understand that you’ll hatch the aspiration to do so by cultivating the path. This is how to practise the teaching of the Buddha.”

His Holiness acknowledged the difficulties and dangers the pilgrims had faced in coming to see him. And when he praised Tibetan determination and the unbowed spirit of the Tibetan people, many of them quietly wiped away tears.