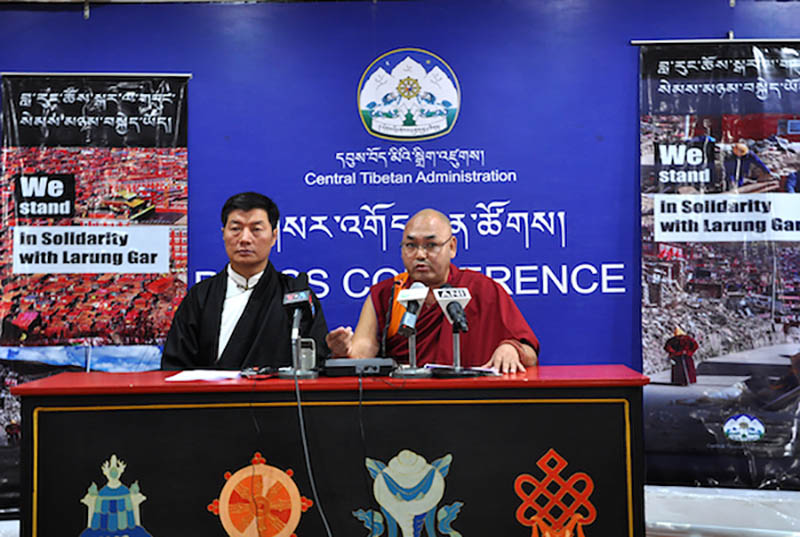 Dharamshala — Sikyong Dr Lobsang Sangay and Speaker Khenpo Sonam Tenphel of the Tibetan Parliament-in-Exile, held a joint press conference December 5th to urge the UN High Commissioner for Human Rights, Prince Zeid, for an immediate intervention to save Larung Gar, one of the world’s largest centres of Buddhist learning in Tibet and requested him to raise the critical human rights situation in Tibet in the opening statement at the forthcoming 34th UN Human Rights Council Session in Geneva, in March next year.

In July 2016, the demolition of Larung Gar by Chinese authorities began as a part of a multi-year plan aiming to downsize the institution by 50 percent and evict at least half of its more than 10,000 residents. A local government order to Larung Gar leaders instructed them to reduce the number of monks and nuns to a total of 5000 by September 2017.

According to latest reports, around 4600 residents have been evicted and around 1500 dwelling destroyed. Saddened by the Chinese goverment's destructive action, three nuns of the centre-Rigzin Dolma, Tsering Dolma and Semgha committed suicide and left notes referring to the demolitions and to government 'harassment.'

Video footage received despite the communications crackdown have caused deep distress with Tibetans around the world. Nuns are seen wailing helplessly watching the send-off of their fellow nuns who were being shoved into buses and sent back to their hometown.

The evictees are forced to undergo patriotic education exercise. Videos show Tibetan nuns dressed in military uniform singing the song “Chinese and Tibetans are Children of One Mother.”Another video shows Tibetan nuns believed to be evictees of Larung Gar performing on stage to pop songs.

Although this year marks the 40th anniversary since the end of the Cultural Revolution, China is still implementing similar repressive policies in Tibet.

“What we see happening in the case of Larung Gar and Yachen Gar is reminiscent of the bitter experiences of Cultural Revolution. The three great monasteries of Tibet-Sera, Drepung and Gaden were destroyed and downsized from several thousand monks to few hundreds now. The current destruction of Larung Gar indicate that the other major monasteries in Tibet could face the same tragic fate. We fear that the Cultural Revolution is reviving in Tibet,”said Sikyong in his address.

CTA also urged everyone to sign the petition ‘Stand with Larung Gar Now’ initiated by ‘Safegaurding Buddhism’ that now has over 147,000 supporters. The petition will be delivered to UN Human Rights Council on World Human Rights day.

“Larung Gar is a highly respected and iconic center of Tibetan Buddhism and significant heritage centre is of great importance in terms of Tibetan language, culture and religion and must be treasured and protected. China’s disregard for fundamental freedoms is currently demonstrated in the destruction of large swathe of Larung Gar where the very religious and learning center is reduced to rubbles,” the Speaker closed with.

CTA will observe a solidarity prayer on December 10th 2016 at Tsuglakhang, the main temple in Mcleod Ganj.