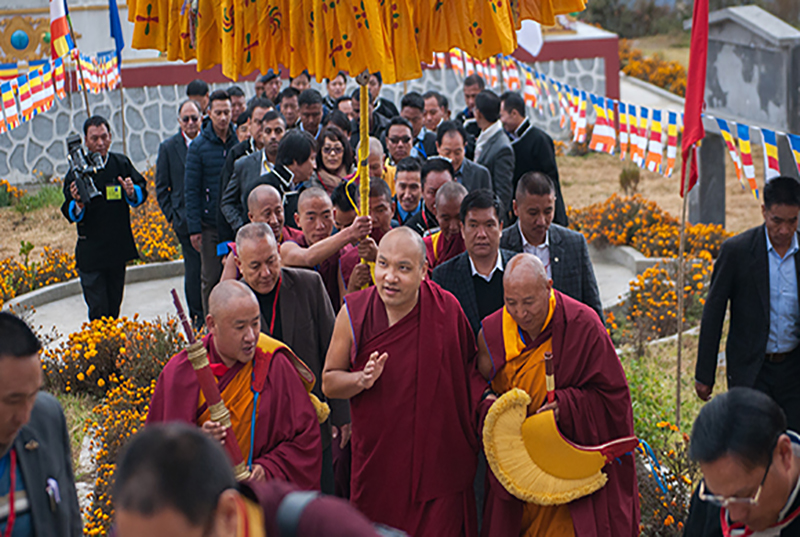 Dharamshala  — The 17th Gyalwang Karmapa Ogyen Trinley Dorje concluded a historic visit to the bordering state of Arunachal Pradesh on December 5th after an eventful and rousing reception from the people there, as well as the state government.

The four day trip included a visit Sera Je Jamyang Choekorling monastery, the Sangyeling monastery and the famous Tawang monastery in Tawang, an area China claims to be of their own as part of southern Tibet.

The 17th Karmapa during his first visit to Arunachal Pradesh toured West Kameng district and gave a teaching to the Tibetans at Gyuto Monastery at Tenzingang before leaving for Kalaktang.

Over his four day trip, His Holiness visited over twenty monasteries and religious sites and made connections with more than thirty thousand people. Thousands of devotees, including hundreds from neighbouring Bhutan also came to listen to the preachings of the Karmapa, said an official.

Kiren Rijiju, Union Minister of State for Home Affairs who met the Karmapa in Bomdilla tweeted, “Massive reception to His Holiness the 17th Karmapa Ogyen Trinley Dorje who is on a visit to Arunachal Pradesh to spread love & compassion,” also adding in another tweet, “After 900 years, HH The 17th Gyalwang Karmapa could again visit Mon region in Arunachal Pradesh. The last visit was by The 3rd Karmapa.”

Secretary to the Office of the Karmapa, Karma Dorjee Namgyal Khortsa, said, “Although the trip is just for a few days, the Karmapa was happy to have met all those people and visit even the smallest of temples and shrines in the area. Chief Minister Pema Khandu was a gracious host accompanying us for a day from 6 o’clock in the morning till evening. Minister Kiren Rijiju, MHA advisor Amitabh Mathur and other dignitaries made the visit worthwhile and fruitful.”

Reacting to India allowing Tibetan spiritual leader Karmapa to visit Arunachal Pradesh, China has apparently expressed hope that New Delhi would refrain from taking any action that might 'complicate the boundary dispute.'

Chinese foreign ministry spokesman Lu Kang said after the trip, "China's position on the East section of the China-India border is clear and consistent. We hope India can abide by relevant consensus and refrain from any action that might complicate the boundary question."

Arunachal CM Pema Khandu who received the Karmapa and accompanied him during some of his schedule earlier this week said the Karmapa and His Holiness the Dalai Lama are “honored guests” of India which makes their freedom of movement an Indian affair and that China should not intervene in India’s “internal matter”.

For many centuries, he has had a connection with the high summits and Buddhist followers of the region. His first incarnation, Dusum Khyenpa (1110-1193), visited and founded monasteries there, and the relationship continued with the 3rd and 4th Karmapas while the last visit was made by the 9th Karmapa Wangchuk Dorje (1556-1603).