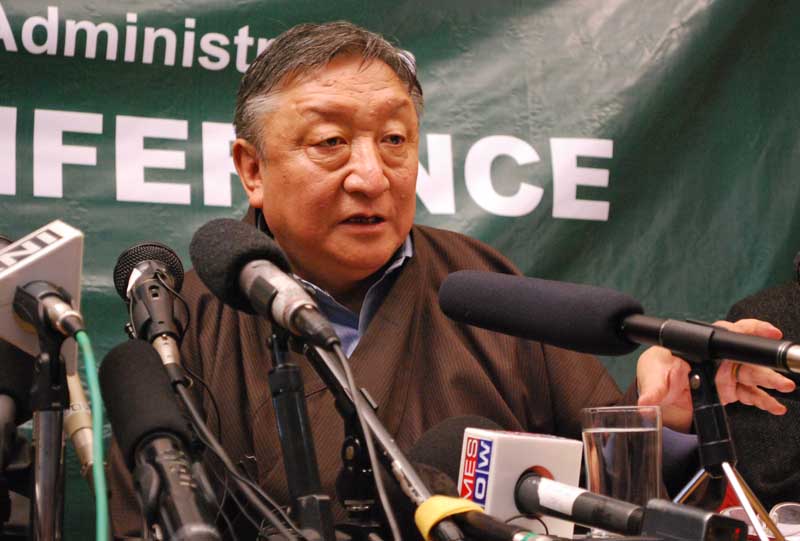 Dharamshala: Lodi Gyari RInpoche, the special envoy of His Holiness the Dalai Lama, released a statement on December 10, 2009 detailing his reaction to China's actions and responses to Tibetan initiatives for China-Tibet Talks. He expressed that China's reaction to His Holiness the Dalai Lama's request for autonomy was initially positive, but that China's policies and press statements have been contradictory.

The Tibetan government in exile is currently planning talks with Beijing for the future. In his newly released statement, Gyari said, "So far, it has been all our initiatives that have been the basis of an perceptible positive side to the dialogue process."

Lodi Gyari Rinpoche said that during the February 2006 China-Tibet Talks, China clearly stated that they were pleased with Tibet's decision to ask for autonomy under the constitution of the People's Republic of China. According to the His Holiness's special envoy, the Tibetan authorities viewed this as a step forward in Chinese-Tibetan relations, that were reestablished in 2002. Although the Dalai Lama expressed optimism when returning to Dharamshala, China refused to issue joint statement with Tibet, addressing the concerns that the Chinese had brought to the February 2006 talks.

Lodi Gyari went on to say that instead of the cooperative response that he had hoped for, China intensified programs in Tibet, such as the patriotic re-education campaign, the "vilification of the person of His Holiness the Dalai Lama," and restrictions on religious practices.

Regarding the dialogue that followed the 2008 uprising in Tibet, special envoy of His Holiness the Dalai Lama explained that the Chinese government explicitly rejected the Memorandum on General Autonomy for the Tibetan People. This document described the basic needs of the Tibetan people, and acknowledged that they can be provided under the constitution of the People's Republic of China. According to Gyari, the Dalai Lama still insisted on more efforts for Chinese-Tibetan relations.

His Holiness' envoy said that Beijing's recent statements have reminded him that it is unlikely that the Chinese will "remove the hat of separatism from His Holiness the Dalai Lama," even though they know that he does not seek independence. Lodi Gyari said that China's portrayal of the Dalai Lama is a means of justifying the oppressive occupation of Tibet to the public.

The senior envoy of Tibetan spiritual leader also spoke of the China's negative portrayal of the "Four Not-to-Supports" in the media. This proposal was discussed in July 2008, and said that the Dalai Lama would not support "activities that would disturb the Beijing Olympic Games," "plots inciting violent criminal activities," "violent terrorist activities," or "activity seeking Tibetan independence." The Chinese had previously discouraged Tibetan authorities against lobbying for their cause through the media.

Lodi Gyari Rinpoche ended his statement by saying, "We feel if the Chinese side is really serious in wanting to address the grievances of the Tibetan people and to provide them with the same rights that are provided for in the Chinese Constitution and the relevant statutes on minority rights, we should do that through our channel and across the dialogue table." He also noted that His Holiness the Dalai Lama is "ever ready to continue the discussions."