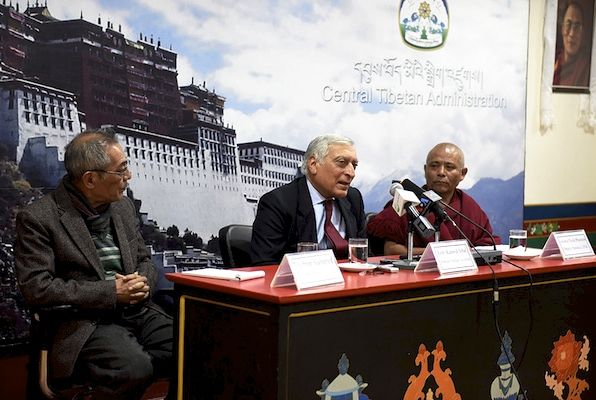 Dharamshala – “His Holiness the Dalai Lama’s agenda accepts Tibet to be part of China but that Tibet must have genuine self rule and respect for Tibetan autonomy, which is a legitimate demand,” Former Foreign Secretary and Ambassador Kanwal Sibal said yesterday, during a visit to the Tibetan Parliament in Dharamshala.

The former Indian Foreign Secretary shed light on important advances that India could make in terms of its policy towards resolving the Tibetan issue. “One, India should begin saying that it had recognized Tibet as autonomous region of China not as military occupied region of China. Let this distinction be made slowly.

“Two, we should tell the Chinese leadership that they have responsibility in the interest of India china relation and in context of the other things, that they must resolve the Tibetan issue in accordance with the wishes of the Tibetan people.”

“The Tibetan people want a resolution through a process of non-violence peaceful negotiation. It is such a rich culture, which needs to be preserved. Then there are issues of environment. If Tibetan ecology is disturbed it can have serious repercussion. They must have a peaceful dialogue and resolve this issue in a peaceful responsible manner. “

Speaking on the recent developments on India-China relations, the Ambassador said, “There is sharpening in some respect of our relationship with China. China has begun to be openly antagonist towards India in three areas: its ‘so-called claims on India’; the China Pakistan Economic Corridor; China’s opposition to designation of Jaish-e-Muhammad chief Masood Azhar as global terrorist and India’s membership in NSG.”

Kanwal Sibal is a distinguished career diplomat who retired as Foreign Secretary to the Government of India. His visit to Dharamshala was facilitated by the Tibetan Parliament-in-Exile. The Ambassador along with his wife Elisabeth Sibal and sister Asha Nanda visited the Tibetan parliament last week to watch the ongoing proceedings of the parliament session.