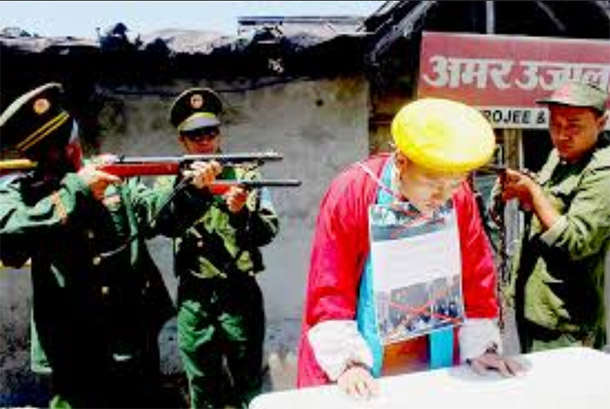 Dharamshala — The regional chapter of the Tibetan Youth Congress in Dharamshala marked the 66th anniversary of when the ‘17-Point Agreement’ was signed on May 23rd, with skit performed on the street displaying the unjust circumstances under which the Tibetan representatives were forced to sign the illegitimate document.

“We (Tibetans) should never forget the day and spread awareness on how the agreement was signed under duress. We should prove that Tibetan roots cannot be destroyed by such a sham and aware the world that China has continuously used such tactics to fool the world,” Lhakpa Tsering, President of RTYC Dharamsala told Phayul.

The short street theatre was to spread awareness, Lhakpa Tsering said, about what the Tibetan representatives underwent before the forceful signing of the 'agreement'.

On 23 May 1951, Tibetan delegation led by Ngabo Nagwang Jigme was forced to sign the '17-point Agreement on Measures for the Peaceful Liberation of Tibet’, which Beijing continues to use as proof to claim over Tibet.

Though the Chinese government celebrates it as the day marking the 'peaceful liberation of Tibet', the Tibetans see it as the death of their centuries-old independence.

“When the agreement was initially signed I had hopes, but looking at the current situation we gained no benefits. I believe in complete freedom of Tibet and Tibetans are the rightful owner of Tibet. I feel the agreement is not at all favorable to us at all,” said Dr. Thogmey, a long-time resident of Dharamsala.

Tibet was invaded by the Communist regime in China in 1949. Since that time, over 1.2 million Tibetans have died as a direct result of China's invasion and continued occupation of Tibet. Over 6000 monasteries have been looted and destroyed and Tibetans have been forced to endure crimes against humanity and acts of genocide including murder, massacres, torture, rape, starvation, extreme deprivation, forced marches, enslavement, brutal violence, and systematic extermination. The communist regime continues to call this a 'peaceful liberation', and that "Tibetans are living in a Maoist socialist paradise."