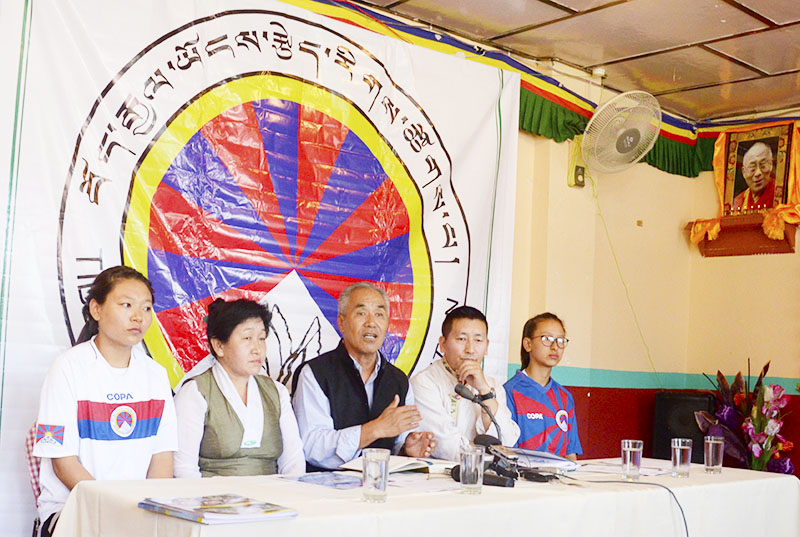 Dharamshala — On June 1st in Hotel Tibet in Dharamsala, the Tibetan National Sport Association [TNSA] in collaboration with the Tibetan Women's Association [TWA], held a press conference on the 2nd Women's Football Tournament at Upper TCV School Football Ground from 4 June 2017. They also shared their future planning to improve women's in the field of sports and games to give women more opportunities.

Present in the meeting was TNSA former General Secretary Karma Sangey, new Executive Secretary Passang Dorjee, TWA Vice President Tsering Dolma, and Tibetan National Womens team representatives Tenzing Jamyang and Tsering Tso all gathered with media to give speeches as well as to share their ideas and opinions with the media.

The main reason to organize such a tournament is to empower and celebrate women's participation in the field of sports and games for health and fitness as well as to help these girls get more real time playing opportunities and experiences on the field. It is also aimed at supporting and building a foundation for the Tibetan Girl's Football at an early age among the Tibetan Schools Girls, by providing better platform to form the Tibetan National Women’s Football Team in the future.
We have two Tibetan Women Teams and two Indian Teams in this tournament that will play on 4th June afternoon at the upper TCV school football ground.

The new Executive Secretary Passang Dorjee in his speech said, "we the Tibetan National Association have plan if the number of women's football teams increase in participation in football, next year it will possible for both men and women to play in the GCMGC tournament."

The TNSA Former General secretary Mr Karma Sangey said, "we have a history of Tibetan National Women's team since 1980, that's why in 2012 we planned to select a Tibetan National team from Tibetan schools in Nepal and India. Now we have already selected 20 to 30 players and have a very great plan in the future. All we need is your kind support and cooperating to make this more effective."

After, TWA vice president Tsering Dolma said, "I am so glad that the Tibetan National Sport Association invited me to this meeting. On behalf of TWA I would like to say in the future if there should be more opportunities provided for women who have interest and passion in the field of sport and games. All the young generation should be taking any opportunities and using different platforms provided to show your abilities is very important."

Our two Tibetan National Women's Football team representatives spoke on their own experiences. First Tenzing Daldon said, "I graduated from Sanpada school, and since i was in class six I started playing football and during that time our school teachers inspired and gave many opportunities for indoor as well as outdoor football matches. I am so happy to play football in the name of Tibet. Sometimes I feel sad that women playing games and tournaments have a lack of audience support."

Last speaker Tsering Tso said, "I came from Tibet in 2008 to India and I went to Suja school. Later I did my class 11 and 12 in Upper TCV. Before I come to India I was illiterate and had no idea how to play football. I started playing football when I was selected in inter-houses competition in school. Later I got opportunities to play football with different people that gave me new encouragement and experiences."