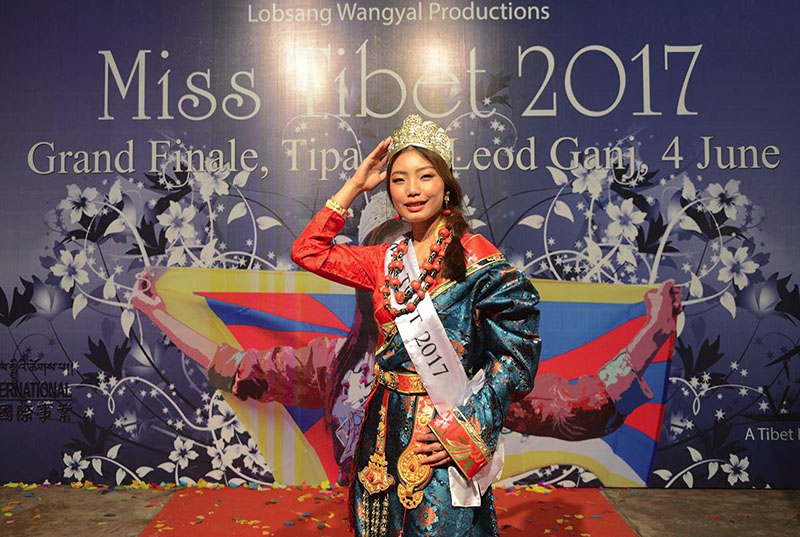 Dharamshala — 21 year old Tenzin Paldon from Kollegal, South India was crowned the winner of Miss Tibet 2017 at a packed TIPA Grounds in McLeod Ganj on Sunday evening to the cheers of thousands of young Tibetan enthusiasts. Miss Paldon is a graduate of Frankfinn Institute where she holds a degree in aviation management. She is currently working as an air hostess for Spice Jet Airways.

Glimpses of the tea party gave us an insight to Miss Paldon's passions and beliefs. Educating the youth of the country and encouraging them to take advantage of this platform was of particular significance to Miss Tenzin.

When asked why she considers the Miss Tibet pageant an appropriate space for her, she said, "For me, it is important to inspire the younger generationsand to be the role model for the young generations over thereand try to take this platform to the international level."

On being crowned as Miss. Tibet 2017, Paldon sent out a message to the Chinese government, expressing her desire to allow Tibet to showcase the harmony in which it's people co-exist. "...and I wanted to say China, look at us, we are staying in another country but we are intelligent and we are representing our country in this way. We're really talented and I just wanted to say that those ladies who are in Tibet, give all the girls a chance to showcase the harmony we live in, as our peace is very important. If the Chinese government would give us a chance to showcase our peaceful state, we would proudly do so."

Inspiring words by Miss Paldon to the younger generation included advice from his holiness, "Be good and be kind and you can achieve anything."

Along with winner Miss Tenzin Paldon, Miss Tenzin Khechoe, a 22 year old student of nursing was crowned as the first runner-up while the place of second runner-up went to Tenzin Nordron, a 20 year old history student of Daulat Ram College.

Apart from winning the official title, Miss Tenzin Paldon also boasted the Miss Photogenic title which was decide by online voting, securing, 5161 votes out of a total of 14,285 votes.

In seven nerve wracking rounds which took place over a course three days, these fearless girls showcased their talent, confidence, belief and passion, each carrying themselves with utmost grace.

The respective winners, Miss Tenzin Paldon, Miss Tenzin Khechoe and Miss Tenzin Nordron by three judges. The jury comprised of Ms Tanshuman Gurung, a former Miss Himalaya, and currently working as the Deputy Branch Head of the Union Bank of India in Nainital; Mr Abhishek Madhukar, a journalist whoclosely follows the life and issues of Tibetan people, and living in Dharamshala for more than ten years; and Ms Anshdeep Kaur from Delhi, a human rights activist and Tibet enthusiast.

The winner and the First Runner-up also won a two-week trip to Vietnam, sponsored by Claire Huynh Hong Hai.