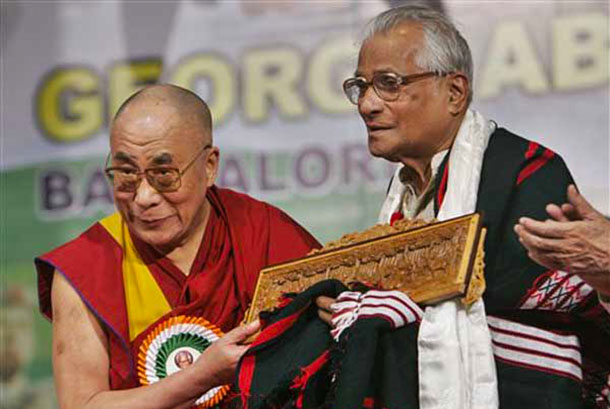 Dharamshala — Top Tibetan leaders in-exile extend greetings to the Former Union Defense Minister of India and prominent supporter of Tibetan cause, George Fernandes on his 87th birthday. On the occasion, a special commemorative event was held at his residence on June 3, 2017.

The secretary of Bureau of His Holiness the Dalai Lama in New Delhi, Tsewang Gyalpo Arya delivered the birthday greetings from the President of the Central Tibetan Administration (CTA), Dr Lobsang Sangay, and the Deputy Speaker of Tibetan Parliament in Exile (TPiE), Acharya Yeshi Phuntsok.

President Dr Sangay on behalf of the CTA extended his warm wishes, "On your 87th birthday, I take this joyous occasion today to express my warmest good wishes to one of the most courageous, industrious and adamant supporter of justice."

"On behalf of my colleagues in the Kashag and Tibetans in and outside Tibet, I wish you all of life's blessings and happiness. You deserve it all and more," Dr Sangay said.

"In your constant fight for justice, you found Tibet a worthy cause to lend your support and since then you have unfailingly and adamantly stood with us every day," he said.

"I admire the fact that nothing has discouraged you from your philosophy and your steadfast moral support for justice is a source of invigoration to all of us," Dr Sangay said.

"You have never shied away from crisis and faced them boldly. We are all fortunate in the extreme to be inspired and learn from you," the President said, adding: "You were and still are a vital part in our struggle."

Ven Phuntsok on behalf of the TPiE extended his warmest wishes to Fernandez on his 87th Birthday. "On the occasion of the 87th anniversary of Honorable George Fernandez, I, on behalf of Tibetan Parliament-in-Exile and the entire Tibetan, would like to extend warm greetings and many congratulations to you."

"You are absolutely a true democrat and a revered political leader in the government of India by upholding the democratic values and beliefs. Moreover, your genuine support for the marginalized people, especially for the numerous refugees in India were exemplary," the TPiE said.

"You have visited Dharamshala for several times since 1990 and we were deeply honored by your distinguished presence on the 48th Anniversary of the Tibetan National Uprising Day, 10 March 2007, accompanied by few other Indian Parliamentary dignitaries," Ven Phuntsok said.

"The first World Parliamentarian Convention on Tibet was successfully convened in 1994 with the kind assistance of dignitaries like you to create an international network of parliamentarians to coordinate activities on the Tibetan cause," the Ven Phuntsok expressed.

"You've always considered the issue of Tibet as a global concern and we, the Tibetan people would like to thank you for the motivation and inspiration, which really encourages us to carry forward our truthful cause," Ven Phuntsok said, adding: "Once again, happy birthday to the most wonderful, courageous and a valuable friend of Tibet."

Lekyi Dorje, head of the Tibetan community in Delhi also presented a Buddha statue to thank his unwavering support for the just cause of Tibet.

A trade unionist, journalist, political activist and then a Minister, all rolled into one, Fernandez set new standards as the Defense Minister of India by braving the inhospitable Himalayan heights to visit troops on the battlefront and rightly became the darling of the soldiers and a good number of average citizens.

The health of the former Defense Minister who is suffering from Alzheimer's disease is deteriorating day by day, and has been away from politics and public limelight since 2010.

In 1998 as a defense minister, he said that for India, "China is the potential threat No. 1." He founded the Samata Party in 1994, which later merged with Janta Dal United. The party currently holds power in India's Bihar state.