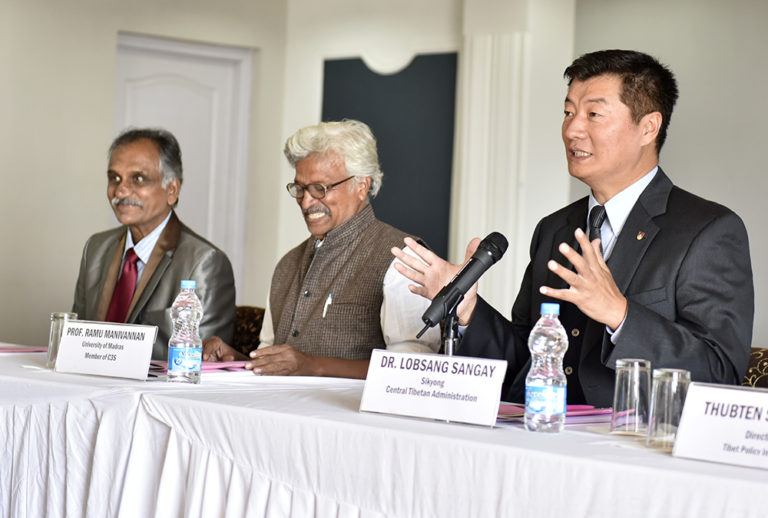 Dharamshala — “It is not sufficient enough to have sympathy for Tibet. Indian scholars should have a proper righteous understanding and look at the political and strategic components of Tibet. Tibet is the truth and we must fight for the truth,” Professor Ramu Manivannan, Head of the Department of Politics and Public administration at the University of Madras said at a conference this week, continuing on to confirm that Tibet has always been an independent country.

Elected President of the Tibetan people Sikyong Dr Lobsang Sangay also spoke at the conference, titled ‘Tibet: A Global Common or a Bone of Contention’ held at Nyatri hall, Gangchen Kyishong in Dharamshala on October 24, following the signing of a Memorandum of Understanding between the Tibet Policy Institute and Chennai Center for China Studies.

In his inaugural address, the President said, “We are at an age when things are changing rapidly, as a result of which the general discourse of the world is also changing. The whole world is at crossroads.

"Unlike the 1990’s where ideologies of liberalism and internationalism were widely prevalent, a time when Tibet movement gained due attention and momentum, the dilemma that Tibetan people faces today, is figuring how to articulate and navigate the Tibetan movement with a nationalistic element in a world where nationalism is misinterpreted or misunderstood."

Speaking on the securitization of Tibet he said, “There are surveillance cameras everywhere in Tibet. China has set up check posts every thirty kilometers in Tibet to restrict movement. They have water buckets and fire extinguishers almost everywhere. They have also issued advanced identity cards that track the movements of the holder. They are also hiring Tibetans as spies and informers to spy on their neighbours, backed by the Chinese policy of ‘if you want happiness then give me security’”.

In the context of Asia, referencing of the 21st century as the ‘Century of Asia’ where the boom of economic growth is much talked about, Dr Sangay emphasised the growth in arms race and militarisation of Asia accompanying economic growth as problematic.

Citing the play-out of arms race in South China and East China Sea to Scarborough Island to Doklam, Dr Sangay repudiated some interpretations suggesting the presence of Tibetans in India and the visit of His Holiness the Dalia Lama to Arunachal Pradesh as the trigger factor of the Doklam conflict. He reiterated what has long been told by the Tibetans about the expansionist design of China, a design married with the arms race that affects all of us including India.

"The world pays homage to China and not India, as the patron of Buddhism. Tibetans and Indians together must work together to change that.

“The Tibet issue is not only an issue of six million Tibetans around the world but also an issue for countries with majority Buddhist population,” he added.

The President's address was followed by the key-note address delivered by Professor Ramu Manivannan, Head of the Department of Politics and Public administration, University of Madras, Chennai.

“I believe this to be my life-long karma to be invoking the call of justice, freedom and the quest for Tibet,” he began.

He asserted that the greatest threats that Tibet faces is the demographic threat, construction at the expense of religious institutions, the securitization restricting freedom of expression and movement and the environmental degradation through exploitation of Tibet’s natural resources.

“Two-third of Tibet is not even in the Tibet Autonomous Region (TAR). Whenever we mention or define Tibet, we must do so in its entirety,” he added.

“It is not sufficient enough to have sympathy for Tibet. Indian scholars should have a proper righteous understanding and look at the political and strategic components of Tibet. Tibet is the truth and we must fight for the truth,” he concluded.