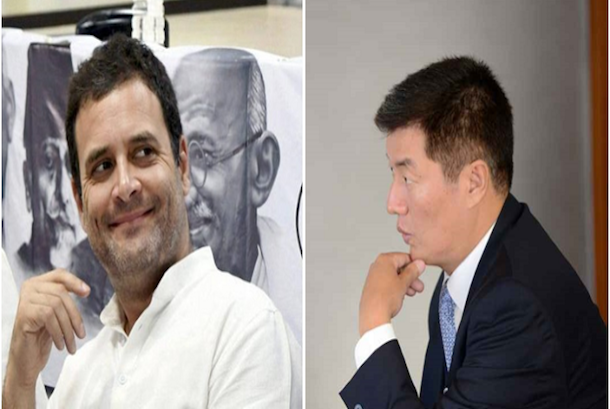 "I congratulate you on being appointed as the President of the Indian National Congress (INC), a party with a glorious history in Indian politics and the Indian freedom movement," President of the Central Tibetan Administration Dr Lobsang Sangay said in a statement.

"As the Congress party embarks on a new era under your leadership, I feel a new hope will dawn on Indian politics that will forge a path of success, and fulfill the aspirations of not just the Congress party but the entire nation with a new fervour."

"Your personal connection with the Indian masses and your easy accessibility to grassroots party workers and ordinary Indians is profoundly inspiring, and I am sure it will enthuse the public in supporting your vision for the Congress party and India," he added.

"I also take this opportunity to thank Smt Sonia Gandhi ji for committing her entire life to INC and bringing it to greater heights in Indian political history."

At the ceremony attended by the outgoing party president Sonia Gandhi and former prime minister Manmohan Singh, Rahul Gandhi was formally handed over the election certificate for being chosen the party president unopposed.

The new president of the Congress exhorted the workers to challenge those who control the "machinery of fear" and "silence the voice of ordinary Indians".

In his first tweet after becoming Congress President, Gandhi wrote, "I want the Congress party to become an instrument for dialogue between Indian people, from all corners of our great country, all religions, all ethnicities, all ages and gender and for our dialogue to be led by love and affection."

Rahul Gandhi is the sixth member of the Nehru-Gandhi family to become the President of the Indian National Congress party. He was appointed to the post after taking over from his mother Sonia Gandhi at a ceremony attended by former Prime Minister Manmohan Singh, out-going party president Sonia Gandhi and Priyanka Gandhi Vadra.