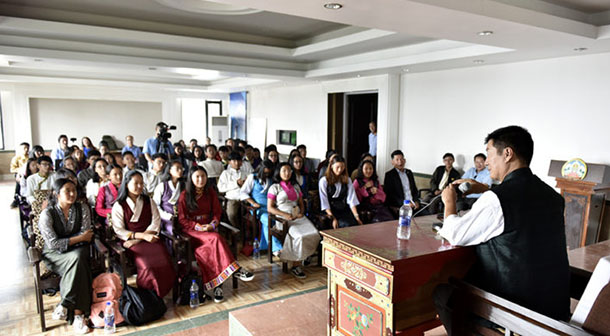 Tibetan students from the diaspora get enrolled in the program wherein they are given education and exercises to learn Tibetan language, culture, music, history and basic teachings on Buddhism,' the CTA official media reported, saying: "This year, 71 students from various parts of United States, Canada and Europe" were attended the event organised by the TCV in Dharamshala, India on August 2, 2018.

Speaking about the issue of identity crisis and the struggles often faced by Tibetan children born and raised in overseas, Dr Sangay, President of the Central Tibetan Administration advised them to integrate into their respective communities but urged them to not assimilate in the process. During the briefing about the CTA and its functionaries, he also reminded the them to be aware of their roots and true identity.

The Tibetan President also indicated that "today’s generation lacks the sense of resilience which must be practiced by focusing on strengthening the awareness of inner strength and urged the them to be capable enough to contribute to the cause of Tibet." Meanwhile, he also shared some of his personal experiences and the challenges he faced to achieve what he had achieved today.

Emphasising on the need to integrate without having to assimilate, Dr Sangay cited examples of three greatest kings of Tibet and Lotsawas (great translators) who diligently practiced resilience and hard work to ensure that Tibet remained an independent nation possessing a distinct language, religion and culture etc. Thus, he reminded the students that they have an extra responsibility to carry forth the ideals of the great kings and scholars.

The report said that "the highly interactive session between President Dr Sangay and the students of TCV summer school program ended on a positive note with President commending them for their participation. He also urged them to excel in their respective fields not just for the sake of making a career but to contribute to the greater good".