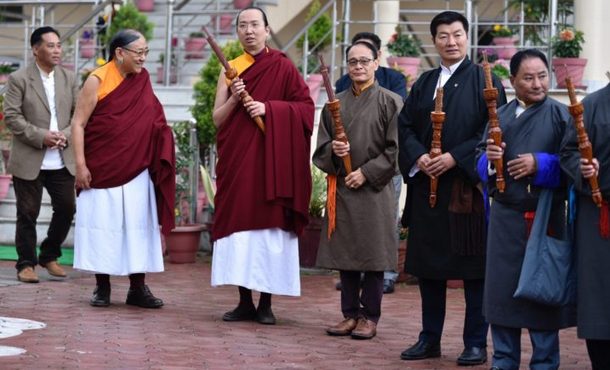 President Dr Sangay participating in the long life prayers to the 41st Sakya Trichen Rinpoche on the occasion of their the golden jubilee celebration at the Sakya Thubten Namgyal Ling Institute, in Puruwala, HP, India, on February 21, 2019. Photo: Pasang Dhondup/CTA

Dharamshala, India — President of the Central Tibetan administration (CTA) Dr Lobsang Sangay has called His Eminence Sakya Trichen Rinpoche's efforts in preserving the Tibetan culture as an "exemplary" while praising him for “consistently supported His Holiness the Dalai Lama in all his endeavours and visions".

Speaker of Tibetan Parliament-in-Exile Pema Jungney and Kalon Karma Yeshi, Department of Finance, CTA were among the special guests at the Sakya Thubten Namgyal Ling Institute in Puruwala, HP, India, on February 21. 2019.

The President extended his congratulations to all members of the Sakya Tibetan Society and took the occasion to express gratitude to Kyabgon Sakya Gongma Trichen Rinpoche for the valuable leadership he gave the Puruwala Tibetan community throughout 50 years. “I feel exceptionally fortunate to have participated in today’s long life offering ceremony towards Kyabgon Sakya Gongma Trichen Rinpoche.”

“Rinpoche has played a commendable role in the founding of the Tibetan settlement and continues to support the spiritual and developmental needs of the settlement. Beyond that, He has consistently supported His Holiness the Dalai Lama in all his endeavours and visions," President said in his remarks at the long life ceremony.

"Rinpoche’s efforts in preserving the Tibetan Buddhist tradition, culture and the unity of Tibetan people have been exemplary,” Dr Sangay said, adding: “On behalf of the Central Tibetan Administration, I pay my deepest gratitude and offer prayers for his long and healthy life.”

Kyabgon Gongma Trichen Rinpoche served as the 41st head of the Sakya Order of Tibetan Buddhism until March 2017, when the spiritual throne was handed over to Ratna Vajra Rinpoche, the 42nd Sakya Trizin. Sakya Tibetan Society situated in Puruwala, District Sirmur, Himachal Pradesh, was established by Sakya Gongma Rinpoche in 1969.

It said that the Sakya Tibetan Society is today a vibrant and energetic Tibetan refugee settlement administered by a CTA Settlement Office and Sakya Society.