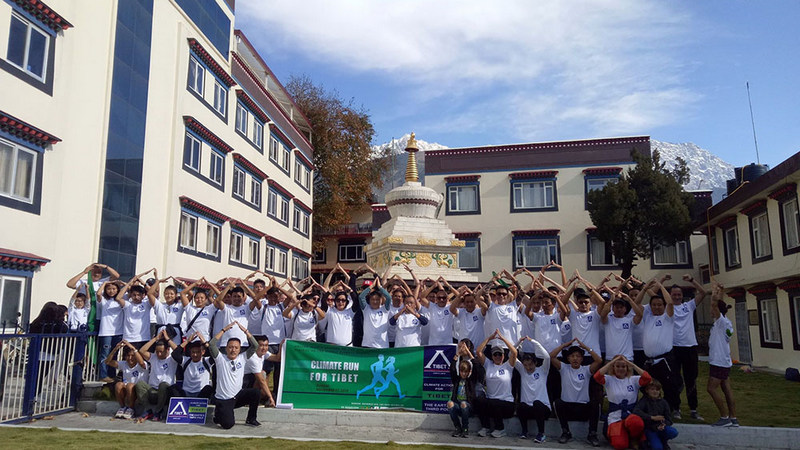 Dharamshala, India—Ahead of the COP25 climate summit which will be held in Spain for two-week from December 2, 2019, the Central Tibetan Administration (CTA) has called upon the world leaders to recognize the global Ecological importance of Tibetan plateau and make Tibet as top of the agenda to any discussion on global climate change.

The climate run for Tibet is part of a month-long COP25 climate action for Tibet; The Earth’s Third Pole, was a campaign launched by the CTA on November 6, to bring focus to the centrality of Tibet in all discussion on climate change and its subsequent importance to the global ecology during COP25 UN climate summit in Spain.

As His Holiness the 14th Dalai Lama has emphasized, “Climate change is not the concern of just one or two nations. It is an issue that affects all humanity and every living being on this earth”. The Tibetan people, the Chinese government and the international community can and should work together to protect the Tibetan plateau, so as to protect the lifeline of 1.5 billion people in the world, especially people living in the Indian subcontinent.

Sitting at an average elevation of more than 4,000 meters above sea level with an area of 2.5 million square kilometers, the Tibetan plateau is the highest and the largest plateau on the earth, hence known as the ‘Roof of the world’.

With 46,000 glaciers, the region, after South and North Pole, is home to the third-largest natural repository of ice, and the largest source of accessible freshwater on earth. Therefore, scientists call it the ‘Earth’s Third Pole’.

Due to its extremely high elevation, vast area, and extensive glacier cover, the Tibetan plateau influences the timing and intensity of both Indian monsoons as well as the East Asian Monsoon. Even the worsening heatwaves in Europe and North-East Asia are linked to thinning snow cover on the Tibetan plateau, highlighting the plateau’s key role in the global climatic system.

Unfortunately, the temperature rise on the Tibetan plateau is more than twice the global average, resulting in extensive glacier retreat and permafrost degradation. This would have disastrous consequences for the global society in general and in particular for people of Asia.