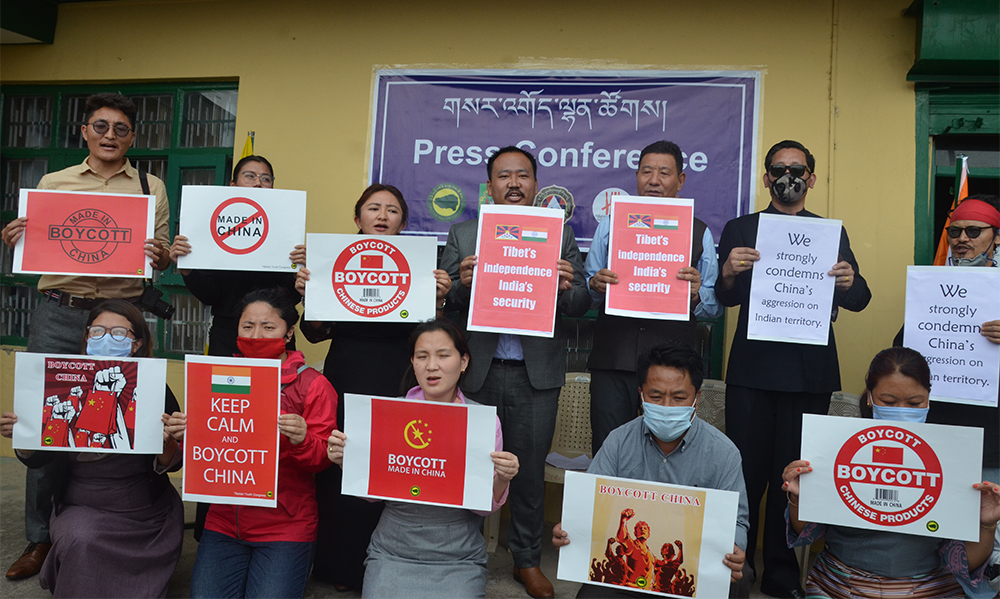 Representatives of the leading Tibetan NGOs raised banners with slogans as such "We strongly condemn China's aggression on Indian territory" and "Tibet's Independence, India's Security," in Dharamshala, india, on June 18, 2020. Photo: TPI/Yangchen Dolma

The most recent tragic event at the Indo-Tibet border demonstrates that China's occupation of Tibet poses a great threat to international peace and security, the Tibetan groups said during a press conference held in Dharamshala, on June 18, 2020.

Five prominent Tibetan NGOs including Tibetan Youth Congress (TYC), Tibetan Women Association (TWA), Students for a Free Tibet (SFT), Gu Chu Sum Movement for Tibet and National Democratic Party of Tibet (NDPT) have issued a joint statement in response to the tragic event happened at India-Tibet border recently. The press conference was attended by over 30 Tibetans and Indians led by representatives of the Tibetan groups.

“At least 20 Indian soldiers, including a commanding officer, lost their lives during a Chinese military invasion at the Indo-Tibet border in Galwan Valley, Ladakh on Monday, which is one of the deadliest Chinese attacks on Indian sovereignty in 45 years," said Gonpo Dhondup TYC President.

"As we pay tribute to the courage of the Indian soldiers and offer our condolences to the bereaved families, we call on world leaders and the government to stand with India against this illegal aggression by Chinese troops on Indian soil and work together to counter China's expansionism,” Dhondup added.

SFT Director Rinzin Choedon said that “China has never shared its border with India until Tibet was occupied by the so-called 'People's Liberation Army In 1949. Over 1.2 million Tibetans have died as a direct result of China's occupation of Tibet. However, Tibetans inside Tibet and in exile have never wavered in our struggle against the colonial occupation of our homeland. It is high time for India to recognize Tibet as an Independent.country and occupied nation by inviting Tibet's legitimate representation on Indo-Tibet border agreement.”

“History has taught us that China can not be trusted. Befriending China thereby ignoring Tibet's issue has been the biggest mistake of India in the past and it would be an unwise strategy for India's National security in the future. Believing a friendship with China comes at our own cost. Even if another border agreement is met, it would be another temporary disengagement but long-term friendship with China will be betrayed by China as she did in the past. Therefore, an Independent Tibet is the only lasting solution for the Indo-China conflict,” the joint statement reads.

“China's greed stretches far beyond Tibet but also to the whole Himalayan region and the world at large as part of their aggressive expansionist policy. Therefore, India has an incredible duty to lead the neighboring countries to challenge against the Illegal and aggressive invasion of China in such critical times,” NDPT President Tsetan Norbu said.

“In addition to the Chinese government's mishandling of the Coronavirus outbreak (which has already claimed the lives of almost half a million innocent people and infected more than 7.4 million people), Beijing has further threatened global security by waging a military invasion against India. The Chinese government must be held accountable for flouting international law and wreaking havoc around the world. Now more than ever, it is clear that we must take immediate action to prevent China from causing even more global instability,” Norbu further added.

As the Tibetan groups stand in solidarity with India, they call upon the government of India and international community to take the following actions seriously:

During the press conference, they also raised banners with slogans as such "We strongly condemn China's aggression on Indian territory", "Tibet's Independence, India's Security", "Boycott China" and "Boycott China's products"